I zipped right through enjoying this historical romance with conflict and suspense. 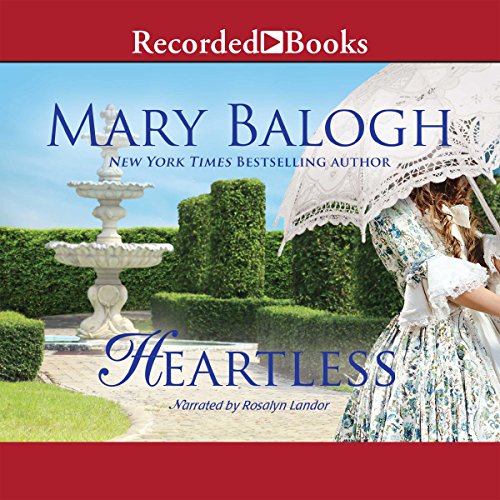 Publisher's Summary
From New York Times best-selling legend Mary Balogh - the beloved author of Longing, Silent Melody, and Beyond the Sunrise - comes a ravishing novel of passion and duty, love, and menace....
Life has taught Lucas Kendrick, duke of Harndon, that a heart is a decided liability. Betrayed by his elder brother, rejected by his fiancée, banished by his father, and shunned by his mother, Luke fled to Paris, where he became the most sought-after bachelor in fashionable society. Ten years later fate has brought him back home to England as head of the family who rejected him. Unwilling as he is to be involved with them, he must assume responsibility for his younger siblings, the family estate he once loved - and the succession. He faces the prospect of marrying with the greatest reluctance - until he sees beguiling Lady Anna Marlowe across a ballroom one night.
Anna, far from being the bright-eyed innocent Luke takes her for, is no more a stranger to the shadows of a painful past than he is. But for her, marriage cannot so easily solve what is wrong in her life - not when a tormentor stalks her to the very doors of Bowden Abbey, where Luke and Anna must learn to trust in each other or risk any chance they may have for a happy future.
©1995 Mary Balogh (P)2015 Recorded Books.


Review:
This is engaging and charming! A little more sexual spice than I like which is surprising as this is a back title (1995 I think) set to audio.

Luke has steeled himself to block out love after losing his first love. He is a consummate dandy but all man, skilled at pistol, sword and women. He has returned from Paris to London at the request of his Uncle to take on the responsibilities of being a Duke and head of the family since his elder brother died two years before. He has been away since he was banished ten years before over a family quarrel. Although he hasn't thought about marriage, and doesn't have love to offer, he decides he should marry before going to face his country home and his widowed sister-in-law.

Lady Anna is a young woman of bright, sunny disposition which hides pain and secrets. She has not planned to marry due to the threat of a man in her not too distant past. But he has not returned from America and she decides to enjoy this taste of freedom in London.

Luke and Anna agree to marry after a three day acquaintance. They have much to learn about each other and the secrets begin to unravel on the wedding night. They both experienced betrayal in their past and current situations and have to reach beyond that if they are going to save their marriage.

I really enjoyed the tone of this story and I loved the growth and transition for these characters. There is good conflict and suspense that carries through to the end. I don't agree that Anna should have held her secrets so long but she had cause to be fearful. I really liked Emily as a character and other secondary characters added to the delightful package. I do enjoy this author highly recommend her stories to readers who love historical fiction.

Audio Notes: Rosalyn Landor is a wonderful narrator. She nails the voices and emotions and I love listening to her.