#NetGalley Book Review: The Year of the Knife by G.D. Penman

This is strange but entertaining urban fantasy.

The Year of the Knife
by G.D. Penman 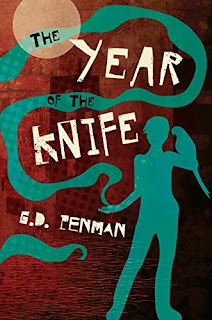 "An addictive blend of magic and murder noir." -Gareth L. Powell, BSFA award-winning author of Ack-Ack Macaque
Agent "Sully" Sullivan is one of the top cops in the Imperial Bureau of Investigation. A veteran witch of the British Empire who isn’t afraid to use her magical skills to crack a case. But Sully might need more than a good education and raw power to stop the string of grisly murders that have been springing up across the American Colonies. Every one of them marked by the same chilling calling card, a warning in the form of a legion of voices screaming out through the killers' mouths: "It IS tHe YEAr oF the KNife."
Sully’s investigation will drag her away from the comforts of home in New Amsterdam, the beautiful but useless hyacinth macaw that used to be her boss, and the loving arms of her undead girlfriend, in a thrilling race against time, demonic forces and a shadowy conspiracy that will do anything to keep its hold on power and ensure that Sully takes their secrets to her grave, as soon as possible.
G.D. Penman’s imaginative The Year of the Knife is a fun, fast-paced urban fantasy mystery with an engaging set of characters, most notably Agent Sully of the Imperial Bureau of Investigation.


Review:
Sully is a top cop in the Imperial Bureau of Investigation (IBI). She is a tough witch who often uses her magical skills to help solve a case or take down a culprit. Her department is dragged into a grisly investigation in the American Colonies. Bodies seem to be possessed by an evil that sends them on a killing rampage leaving the message "It IS tHe YEAr oF the KNife." Sully's initial confrontations with the killers don’t go well. She keeps trying to save the civilians and even the possessed killers, but the results aren’t working out as she ends up with serious collateral damage.

Although Sully is strongly dedicated to her work chasing down monster criminals, she has issues with her IBI office recognizing the political problems that exist. The prior Director, whose name no one can remember, has been turned into a Macaw nesting in his office which has been commandeered by the current Deputy Director. Like the missing name spell, there is a key word that is hidden by powerful magic that is hindering the investigation.

Sully first seeks the help of a rather ghoulish (in a twisted fun character) coroner who loves experimenting with the corpses brought in for autopsy. When Raavi can only provide limited information, Sully pulls in a master magician and even consults with a demon trapped in a doll (shades of Chucky or Annabelle).

In her personal life Sully is trying to keep it under wraps that she is hooking up with her former lover who is now a vampire – a species generally killed off or exiled. Marie gives encouragement to Sully but also puts her mission at risk.

The story is full of action with magic and monsters. This is a bit zany as it bounces from murder scene to consulting scene. The dialogue is snarky and fun. Sully's sexual orientation is upfront and her relationship with Marie is an interesting side thread that is nicely handled. My favorite extra element is the alternate reality/history which is revealed slowly at first, emerging more strongly as the book progresses.

My last note on the reading was “How do authors think up this crazy stuff?” I do recommend this to readers who like urban fantasy and want something out of the ordinary.


Source: NetGalley 2017. This qualifies for 2018TBR, NetGalley and Alphabet Challenges.
Posted by Martha Eskuchen at 10:31 PM