This is another engaging listen in this urban fantasy series.
Vision in Silver
A Novel of the Others
By: Anne Bishop
Narrated by: Alexandra Harris 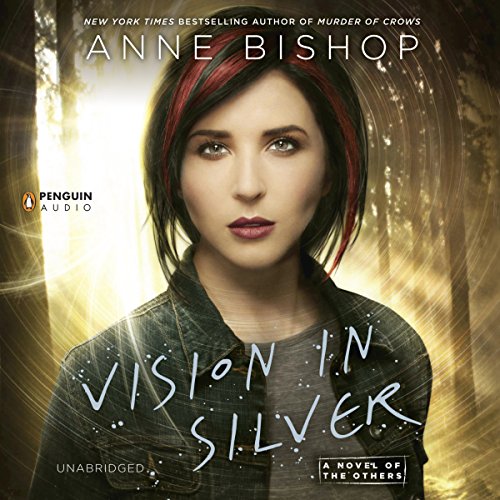 Publisher's Summary
The New York Times best-selling author of The Black Jewels Trilogy transports readers to a world of magic and political unrest - where the only chance at peace requires a deadly price....
The Others freed the cassandra sangue to protect the blood prophets from exploitation, not realizing their actions would have dire consequences. Now the fragile seers are in greater danger than ever before - both from their own weaknesses and from those who seek to control their divinations for wicked purposes. In desperate need of answers, Simon Wolfgard, a shape-shifter leader among the Others, has no choice but to enlist blood prophet Meg Corbyn’s help, regardless of the risks she faces by aiding him.
Meg is still deep in the throes of her addiction to the euphoria she feels when she cuts and speaks prophecy. She knows each slice of her blade tempts death. But Others and humans alike need answers, and her visions may be Simon’s only hope of ending the conflict.
For the shadows of war are deepening across the Atlantik, and the prejudice of a fanatic faction is threatening to bring the battle right to Meg and Simon’s doorstep....
©2015 Anne Bishop (P)2015 Penguin


Review:
Meg’s new friends among the Others helped to free the cassandra sangue in Book 2, Murder of Crows. Unfortunately, the fragile blood prophets are struggling to survive without the controlled settings they have been raised in. The call goes out to Simon seeking help so Meg, who has managed to find a place, work, and friends in the Lakeside Courtyard, is asked to provide guidance to help the other girls. As human friends help Meg develop a guidebook, they begin to recognize that she has her own fragility, risks and triggers. Meg knows that each prophecy slice brings her death closer, but there are pressures that make cutting urgent to the shock and disapproval of her friends.

Simon’s community at Lakeside is one of the few communities that is having success combining humans living with the Others. The community is purchasing homes to accommodate human workers while humans and Others are joining on field trips. Meg’s prophecies come just in time to protect a human family and to give a warning to Simon and a group of the Others and humans out for a shopping adventure.

Meanwhile, an opposing faction is creating difficulties between humans and the Others. That faction thinks they can cut off lines of supplies to the Other communities, but they failed to think it through since the base resources are in the control of the Others. Certain leaders in the Humans First and Last Movement are also convinced that there are jewels that have been stolen and are in the hands of one of the human officers friendly to Lakeside. Once the jewel issue is faced, there is still a threat that could intensify the already high tensions between humans and the Others.

As offensive as the cutting may be, it creates an interesting element of Meg’s growth including both confusion and emerging confidence. I enjoy the conflicted relationship between Meg and Simon which has its own sweet aspect. I am still impressed by the author’s good blend of character development and plot adventure. I look forward to listening more in this series.

Audio Notes: Alexandra Harris does a wonderful job narrating this series. She provides distinct voices and the emotions that add to the energy of the story. I plan to continue to listen to the series.