This is a quick, fun story about a retired superhero.
Baron Steele
By: Rhett C. Bruno , Jaime Castle
Narrated by: R.C. Bray 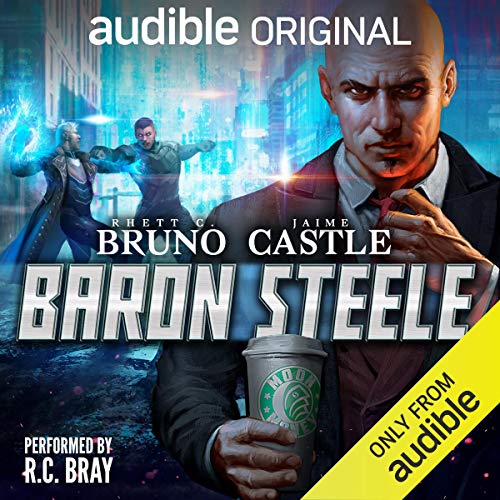 About This Audible Original
Paul Steele, known to the world as Baron Steele, isn’t your average masked crimefighter. As a matter of fact, he doesn’t even wear a mask. And he doesn’t even fight crime anymore. That’s for the guys with too much brawn and not enough brain.
No, Steele works in consulting. After having his license revoked by the Guild of Masked Crimefighters, he decided he would scout talent instead. Match up heroes with their villainous counterparts, help the young bucks and buckettes discover their talents and abilities. That sort of thing.
It’s all going fine and well until Steele gets a bad cup of coffee. No. Seriously. Day after day, the same little twerp gets his order wrong. From there, it’s a downhill spiral into chaos, and Steele finds himself fighting for his freedom in a court of law. Did he really kill a barista over a cup of joe?
Don't miss this hilarious spin on the superhero genre from the number one Audible best-selling duo of Rhett C. Bruno and Jaime Castle.
©2020 Aethon Books (P)2020 Aethon Books


Review:
Paul Steele, formerly known as masked crimefighter Baron Steele, retired from active crimefighting after he ran into problems with the superhero guild. Now Steele operates a consulting business, scouting new crimefighter talents. He interviews would-be-heroes to determine if they have appropriate skills and if they do, he helps to train them in preparation of facing a matched villain.

One morning Steele has had it with a local barista who keeps messing up his coffee. His tirade against the young man is witnessed by others and will come back to haunt him, landing him in trouble again with the Guild.

I really didn’t know what to expect, but this is a quick, fun story. Baron Steele is a gruff, realistic character. I appreciate the world-building and irony in the events, all of which are distributed in under an hour! Great for a quick listen and I will look forward to listening to more in the series. I recommend this to those who enjoy superhero, comic book type stories, and short stories.

Audio Notes: R.C. Bray does his usual spot-on narration bringing Steele’s character - the contempt, arrogance, and frustrations - to life. He also provides distinct voices and fitting emotion for each of the other characters. The narration contributed to my enjoyment of the story.


Source: Audible Plus Catalog October 2020. This qualifies for 2021TBR and 2021Audiobook goals.
Posted by Martha Eskuchen at 5:30 AM