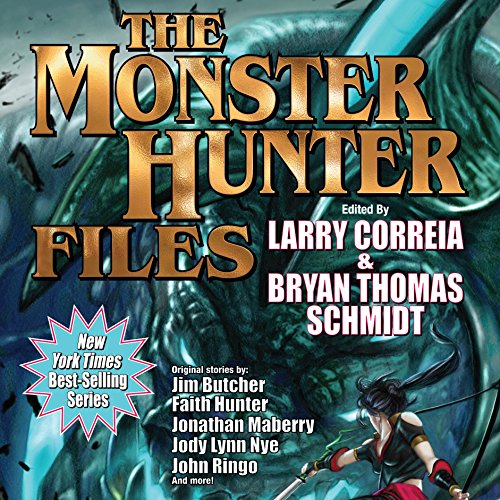 
Publisher's Summary
For well over a century, Monster Hunter International has kept the world safe from supernatural threats small and large - and, in some cases, very, very large. Now, join us as MHI opens their archives for the first time. From experienced hunters on their toughest cases to total newbies' initial encounters with the supernatural, The Monster Hunter Files reveals the secret history of the world's most elite monster fighting force.
Discover what happened when Agent Franks took on the Nazis in World War II. Uncover how the Vatican's Combat Exorcists deal with Old Ones in Mexico. And find out exactly what takes place in a turf war between trailer park elves and gnomes. From the most powerful of mystical beings to MHI's humble janitor, see the world of professional monster hunting like never before.
Featuring 17 all new tales based on Larry Correia's best-selling series, from New York Times best-selling authors Jim Butcher, John Ringo, Jessica Day George, Jonathan Maberry, Faith Hunter, and many more.
Also includes stories by Larry Correia, John C. Wright, Jody Lynn Nye, Mike Kupari, and Brad R. Torgersen.
©2017 Larry Correia. All stories 2017 by Larry Correia, except "She Bitch, Killer of Kits" 2017 by Larry Correia and Faith Hunter. (P)2017 Audible, Inc.

Review:
I enjoy the Monster Hunter International (MHI) characters, and this is a fun collection that focuses on side stories for several of the well-known characters. There are stories of Julie Stackleford’s childhood, her husband’s, Owen’s, current day, and Franks facing a major threat in WWII. There are also some new monsters and hunters I would like to read more about in the future.

Another fun thing about this collection is that there are so many authors who brought their talents to share in the MHI universe. I honestly can’t say that I recognized distinct author voices because they blended so well with the world of MHI.

There are 17 stories making for quick listens. My top picked stories include:
• Thistle by Larry Correia (I hope to see this character in future stories.)
• Small Problems by Jim Butcher (Even janitors can be successful hunters.)
• Sons of the Father by Quincy Allen (These sons may not have met their hunter father before his death but they sure got his skills.)
• A Knight of the Enchanted Forest by Jessica Day George (Light, fun turf war between elves and gnomes.)
• Huffman Strikes Back -by Bryan Thomas Schmidt & Julie Frost (Revenge sought against one of the top MHI hunters.)
• The Gift by Steve Diamond (A Secret Order of Vatican's Combat Exorcists

I recommend this book for MHI fans that need a hunter fix (like me). And readers who enjoy monsters and heroes would like this too.

Audio Notes: Oliver Wyman, Bailey Carr, Khristine Hvam did a great job sharing the fun. Wyman is the usual narrator for the MHI series and I love returning to his voice for so many of the characters. The other narrators added to vary the tone and provide more female voices which enhanced my listening engagement.