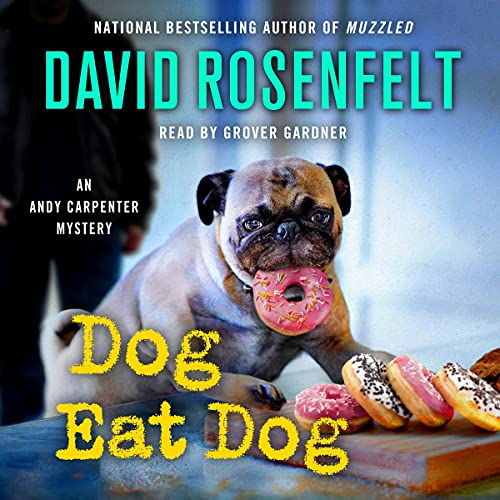 
Publisher's Summary
Lawyer Andy Carpenter and his golden retriever, Tara, work to free a man who risked it all to help a dog in need.
Lawyer Andy Carpenter and his wife, Laurie, enjoy walking their dogs, Tara and Sebastian. By this point in their marriage, it’s routine. When out for one of their strolls, their simple ritual isn’t so simple anymore. Across the street, a man is mistreating his dog. Three things happen at once: Andy yells, Laurie runs to stop the abuse, and so does a closer passerby, who so thoroughly beats the owner that both are arrested when the cops arrive.
Andy scoops up the dog and takes him to the Tara Foundation, the dog rescue organization that’s always been his true passion. Meanwhile, at the police station, the passerby is identified as Matthew Jantzen, and he’s wanted for murder. Andy and Laurie are struck by the fact that Jantzen, a man on the run, would nevertheless intervene to help a dog, and decide to find out more.
Dog Eat Dog, the twenty-second installment in the Andy Carpenter series, features the charming cast of characters - old and new - that David Rosenfelt is known for and the dogs that accompany them.


Review:
Andy Carpenter is a wealthy semi-retired lawyer who would rather spend his time walking his beloved dogs with his beloved wife, Laurie. Andy likes to avoid work when he can but isn’t about to let injustice pass by. An evening walk with their dogs lands Andy in a new case when a stranger steps in to rescue an abused dog. The man gets arrested – not just for beating the abuser but for a pending double murder charge. Andy reluctantly agrees to help the accused, Matthew, as he is returned to Maine to face the two-year old charge. Matthew insists he is innocent, but it will be hard to overcome the evidence of Matt’s DNA on the hand of the dead man.

Andy tries to leave Matt in the hands of the local defense attorney, but he just can’t do it. When Matt’s newly discovered half-sister pleads with Andy to take the case, he agrees. Andy relocates to Maine to begin the trial prep but soon runs into a threatened attack alone in the parking lot. Laurie isn’t about to allow that to slide, so soon the team, including Laurie (and the dogs), bodyguard/muscle Marcus, and hacker/accountant whiz Sam, arrive in Maine. Laurie’s other K-9 investigator, Corey, and his German Shepherd Simon arrive soon after.

Andy and team do their usual thorough job of turning over the rocks and digging the dirt for other suspects. This brings out connections to drug dealers and an extreme militia group and also leaves bodies in the wake of questions. But Andy still must address the DNA problem.

I enjoy this series and the narrator. There are always several suspects, often FBI involvement and usually a trail of bodies. I love following the trial questions and ‘watching’ as Andy presents the evidence that leads to reasonable doubt, and reveals the true villains. The fast-moving plot is enhanced with Andy’s self-deprecation and snarky banter.

While I was listening to this 23rd installment, I got my husband to listen to book one, Open and Shut, which he enjoyed. The stories can be read as standalones but it is much more fun to have at least read the first several in the series so you know the team characters. I recommend this to readers who enjoy mysteries with legal procedures ... and dogs.

Audio Notes: I am sure I have noted it in prior reviews of this series, but Grover Gardner, is the wonderful, fitting voice of Andy Carpenter. Gardner has an appropriate NJ/NY tone delivering distinct voices with appropriate energy. I love listening to the stories and hear this narrator even if I occasionally read an ebook version.