This is an engaging time travel that leads to a second story.

The Alchemy Thief
by R.A. Denny 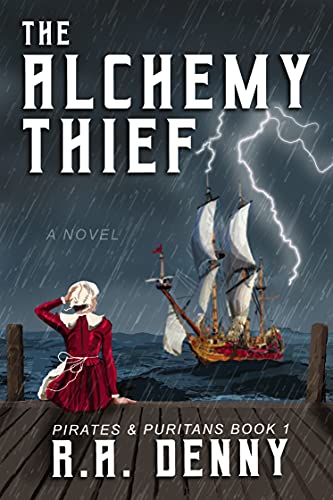 
When the secrets of the past threaten to destroy the future.
A tale of hope, resilience, and the indomitable spirit of a woman, this sweeping epic spans the Atlantic from New England to Morocco during the Age of Exploration.
2019: A young woman finds a relic engraved with a mysterious symbol off the coast of Martha's Vineyard. Terrorists in Morocco steal a 17th-century book engraved with the same symbol. As the woman struggles to unravel the secrets behind the symbol, her life changes in ways she could never have imagined.
1657: Transported back in time, she meets the alchemist, John Winthrop, Jr. who is plotting to lure the greatest scientific minds to the New World. But the more she learns, the more she fears for the lives of the loved ones she left behind.
In a stunning twist of fate, a modern terrorist has traveled into the past, where he has become a Barbary Corsair. He has plans of his own. And he will stop at nothing to succeed.

Review:
Experience “Peri” is a young college student from Massachusetts who snuck away with a friend to visit Morocco. She and her friend met a young boy who guided them into a museum where she saw an old 17th-century manuscript before a true guard threw them out. After returning home she is befriended by a handsome young man who seems interested in the bodkin she wears in her hair. She found the antique piece, with its unique symbol, off the beach one day.

In Morocco the book is stolen by a young Arab boy, Ayoub, and his mother, both of whom are willing to sacrifice in order to take out the infidels. Ayoub escapes and discovers a strange needle inside the cover of the book which he pockets before delivering the book as instructed. The men he delivers the book to toss him into the water and suddenly Ayoub is caught up in a ball of light. When he awakes he is a long way from home. He becomes a cabin boy on a pirate ship which isn’t much different from the streets where he grew up accustomed to being surrounded by brutality and killing. Ayoub has knowledge of technology in the future but that may not help him survive in 1647.

Meanwhile, Peri, has found a job as a Puritan guide for a facility at Plymouth Bay. One morning a strange storm blows up and Peri is caught into a ball of light. She drops into the water and is rescued by men in period clothing. As shocking as it is, she finds herself rescued by an American Indian and delivered to a Puritan community in 1657.

Peri enjoys her friendships with the young Puritan women, including one who is her great, great something grandmother. She also makes friends with two young men from the local Wampanoag tribe who have converted to Christians. Peri is able to discuss books and science with one of these men, her rescuer, Daniel. Peri learns that she might find a way home through the alchemist work of John Winthrop, Jr. and is thrilled to go with Daniel when he is offered the opportunity to study with Winthrop.

As the plot develops, the connections between the two time “travelers” becomes clearer. The past and current day connections begin to be clear also. But the question remains whether Peri can stop a terrorist attack either by returning to the future or changing events in the past.

Initially the story is a bit confusing, but it didn’t take too long before the threads began to weave together. The author has clearly done a wonderful job of researching the history of the time, the people and unique details. Denny does a great job of mixing facts with an interesting fiction that has elements of science, suspense, and a touch of romance. Although I found the story engaging and it has an ending, it is not concluded but moves into a sequel. I have mixed feelings about that. I do recommend this to readers who enjoy time travel elements, and 17th Century settings. Just be forewarned that the story continues.