Audible Book Review: Written in Red: A Novel of the Others by Anne Bishop

This is very good so now I will be into this series.
Written in Red
A Novel of the Others
By: Anne Bishop
Narrated by: Alexandra Harris 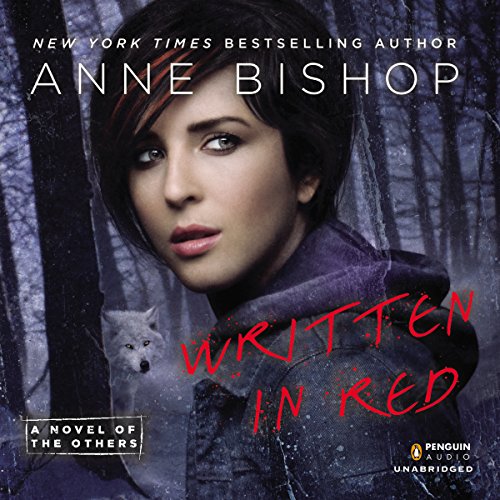 Publisher's Summary
No one creates realms like New York Times best-selling author Anne Bishop. Now in a thrilling new fantasy series, enter a world inhabited by the Others, unearthly entities - vampires and shape-shifters among them - who rule the Earth and whose prey are humans.
As Cassandra sangue, or blood prophet, Meg Corbyn can see the future when her skin is cut - a gift that feels more like a curse. Meg's Controller keeps her enslaved so he can have full access to her visions. But when she escapes, the only safe place Meg can hide is at the Lakeside Courtyard - a business district operated by the Others.
Shape-shifter Simon Wolfgard is reluctant to hire the stranger who inquires about the Human Liaison job. First, he senses she's keeping a secret, and second, she doesn't smell like human prey. Yet a stronger instinct propels him to give Meg the job. And when he learns the truth about Meg and that she's wanted by the government, he'll have to decide if she's worth the fight between humans and the Others that will surely follow.
©2013 Anne Bishop (P)2013 Penguin Audio


Review:
This unique fantasy takes place in a world where humans and Others have negotiated a truce after years of battling with the humans suffering as ‘clever prey’ under the view of the Others. The Others consist of non-human beings like vampires, elementals (Winter, Air, etc) and many shape-shifter creatures from birds to bears, horses, and wolves. The humans are now living mostly securely on certain lands known as "reservations while the Others live in Courtyard communities observing the ‘prey’.

Meg is a rare Cassandra Sangue, a blood prophet who is able to see the future when her skin is cut in precise control. She has escaped from the very secret owner/organization who exploits these women, keeping them in confinement and limiting their knowledge except as needed to make profit from selling their prophecies.

As she was fleeing in a snowstorm, Meg stumbled into an Others Courtyard. The Others district leader, Shape-shifter Simon Wolfgard, is reluctant to give shelter to a person on the run but the community desperately needs a Human Liaison. Simon recognizes that Meg is not just ‘prey’ like normal humans. He decides to give Meg a trial run especially as it helps him avoid the pestering of a young woman who keeps throwing herself at him and begging for the job. To everyone’s surprise, Meg quickly shows that she cares about the postal office job even as she tries to learn how to act in society. The humans are comfortable with her professional approach to the clerical (but important) task and the Others are entertained and cheered by her friendliness and caring gestures. The Others come to care for Meg and are determined to protect her especially as they learn that outside, human forces are intent on kidnapping her.

Although some might see Meg as frail, she has an inner strength that is revealed as events unfold. She may be cautious of the clearly powerful Simon, but she won’t kowtow to even him. She has seen visions and knows that danger is imminent. Meg is intent on protecting Simon’s damaged but emerging nephew, “pup” Sam.

I like stories with ‘otherworldly’ creatures and they abound in this story. I loved the relationship between Meg and the Others. There is no overt romance but clear budding friendships that may have future growth.

The world-building is wonderful and the story full of tension and suspense. The characters are engaging and even the villain is well developed. This first volume has a logical conclusion spot but clearly, there is plenty to come. I'm a few years behind getting to this series but now I’m hooked. I will be continuing with the series and I recommend this to readers who enjoy intriguing urban fantasy.

Audio Notes: Alexandra Harris does a very fine job with the narration. She provides different accents for the many characters and her voice for Meg fits well. The narration carries through on the good pacing and emotion. I enjoyed the audible performance.