This is gritty but I was glued to listening.
Harden
Lee Harden, Book 1
By: D.J. Molles
Narrated by: Christian Rummel 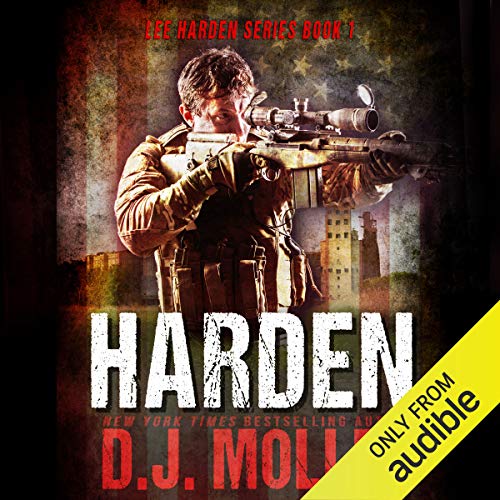 Publisher's Summary
Harden is the highly-anticipated return to the NYT best-selling series, The Remaining.
It’s been three years since Lee Harden emerged from his bunker into a world gone mad. Governments have fallen. And new ones have taken their place. In the United Eastern States, Lee and his team of battle-hardened operatives walk a tightrope of survival, keeping their fledgling society safe from the creatures beyond their gates - and from the enemies within.
Then, an ambush in hostile territory reveals a traitor in their midst - and leaves Lee barely clinging to life. Wounded and on the run, Lee and his team race to uncover the leak before it’s too late. Through a background of destruction, betrayal, and newly-evolved apex predators, they must stay one step ahead of a ruthless organization spreading out of the south - an organization that has allied with someone who wants Lee dead, and the United Eastern States demolished. But how do you stay ahead of an enemy that knows every move you make?
Reintroducing one of the most beloved heroes in post-apocalyptic fiction, Harden immerses you in a reality of desperate gambits, where wrong moves could cost the lives of thousands, but saving them could cost your humanity. The only rule is NEVER STOP FIGHTING.
©2018 D.J. Molles (P)2018 Audible, Inc.


Review:
Harden is a dedicated soldier who found himself as one of the few left with resources when a virus turned the majority of people into zombies. He started his days struggling for survival with the mantra “the only easy day was yesterday”. (The Remaining.) This story opens with Harden nearly dead. His team is trying to revive him from a chest wound while they are on the run and under fire. Harden is now struggling to live, get up and fight, reminding himself that this is who he is: he has to protect his team and he can “never stop fighting”.

Harden helped establish a community of survivors which has allied with other groups along the coast as the United Eastern States. They all face the threat of self-appointed “president” Briggs who has commandeered resources and set up base in Colorado. Briggs wants to abandon the south to the infected hordes and he needs to eliminate Harden to get to the resources Harden has gathered. Harden and his team are facing a new force and coping with the realization that someone from their home base at Fort Bragg has betrayed them.

Harden and allies were able to stop a horde of infected about to take over North Carolina. But now the infected have adapted and are changing into stronger and more reasoning creatures dubbed Primals. While Harden and team try to escape, trouble is expanding back home. There is opposition sniping (literally) at Angela, the selected leader (and semi love interest of Harden). And some of the residents have gotten lax about perimeter safety allowing a threat into the protected community. They are in crisis when they learn that there is a mole and traitor in their midst.

I was glad to pick up this series again and appreciated that Harden is exhausted and struggling (after he survives death). I had forgotten how harsh the language is and I had to get into the story to get around the swearing. Thank goodness that Mr. Molles concentrates on intense plotting and suspense. I stayed up too late listening and was glad and sad at the end. Glad because there is a small light of hope and sad because the book ended with open issues (mini cliff hanger). I will have to pick up the next one to continue the saga. I recommend starting this series at the beginning.

Audio Notes: Christian Rummel continues to do a wonderful job providing voices and emotional intensity for these characters. The narration enhances my enjoyment of the story.

Posted by Martha Eskuchen at 8:42 PM