This is a satisfactory conclusion although I don’t want the series to be over.

The Remaining: Extinction
by D.J. Molles
Narrated by: Christian Rummel 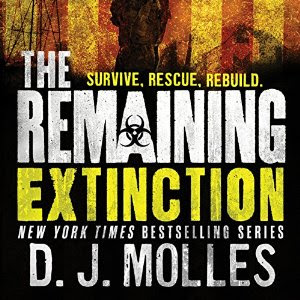 
Review:
The healthy plague survivors led by the bottomless determination of Captain Lee Harden now face the infected hordes that are flooding into North Carolina from the northern states. Lee has already survived an assassination attempt and returned from near death to continue to lead the survivors at Camp Ryder. But the opposition has not done with its efforts to stop him. They will take ruthless steps and use betrayal to try to coerce Lee’s capitulation.

Lee and his allies make a last ditch effort to eliminate the hordes before they overrun North Carolina. As usual, the best laid plans face problems in the final execution and the situation is tense and frightening.

The lines between friends and enemies has become blurred at this point in the series. There are more human betrayals and losses to be suffered. There are also dangerous rescues to cheer. Some characters face a last chance for redemption and one newer character is revealed who might come as a surprise to some readers.

I enjoyed the continuing action, emotional ups and downs, twists and surprises. Either the language wasn't as severe in this book or I was more accustomed to it (I hope not) as it was not so glaring to me. There is still quite a bit of violence which goes hand in hand with the story lines.

This is intended to be the conclusion of the series which makes me sad. Molles really does a good job of wrapping up most of the loose ends and character threads. Still there is room for more beyond this stage and I would be eager to see the series continue. I truly enjoyed the action ride.

Audio Notes: As I have noted in the previous reviews I have greatly enjoyed Christian Rummel’s multi-faceted narration. He manages the variety of voice well and provides good emotional intensity and action. I highly recommend this series in audio. (Now I will be looking for more books narrated by Rummel in hopes of finding another good series.)


I had to get the last book to complete this series! I picked this up at Audible with my second September credit. It qualifies for my Audio Challenge.
Posted by Martha Eskuchen at 10:48 PM