Book Review: The Remaining: Trust: A Novella by D.J. Molles

This Novella presents background material and an important character for this series.

The Remaining: Trust: A Novella
by D.J. Molles 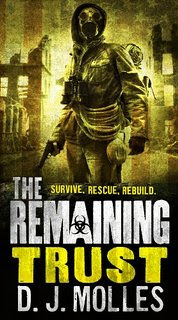 D..J. Molles' stunning Remaining saga continues in this first novella in the series set in a world ravaged by a bacterium that has turned 90% of the population into ravenous animals.
While Captain Lee Harden struggles to fulfill his part in Project Hometown his trusted friend and ally Major Abe Darabie works to hold up his end of the mission. But caught between his responsibility to the mission and the ambitions of a new president Abe must decide where his duty lies and whom he can trust in a country turned upside down.


Review:
This novella focuses on a character who, although mentioned in the previous books, has not been an active character. Major Abe Darabie was Captain Lee Harden’s superior in Project Hometown. They were friends before the plague hit but now it appears that Abe is operating under new orders from the new – or in Lee’s opinion “acting” - president.

Abe is called out to help a team that is retrieving supplies. The team has been attacked and Abe is alarmed when he learns the identity of the attackers. The new information has Abe questioning the changes being implemented by President Briggs. Can Abe trust the ambitious intentions of the new president or should he trust his old orders and duties?

This gives the reader an up close view of Abe and the dilemma that officers face when duty to a superior conflicts with duty to the people. What happens when superior orders are inconsistent with doing ‘what’s right, legally and morally’? Who defines the ‘right’ and where is the line drawn between safety and survival for some but not for all? The novella isn't as action intense as other installments but it serves an informational purpose rather than just more action.

I enjoyed this quick novella and thought it was a good way to fill in the background of the opposition that has declared Lee to be a “non-viable asset”. Abe, and his second hand man, Lucas, are developed so they can appear in the next full installment(s) of the series. The price was a bit high for the product but it was more acceptable in digital format than the price of audio for such a short work.


I purchased this Novella which is one of two that fit before the fifth book in the series.
Posted by Martha Eskuchen at 10:00 PM