Book Review: Awaken His Eyes: The Awakened Book One by Jason Tesar

I found this story engaging but was disappointed with the ending.

Awaken His Eyes: The Awakened Book One
by Jason Tesar 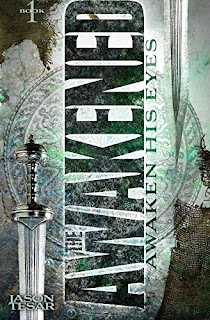 Mankind's greatest hero will be awakened!
Book 1 of 9 in the bestselling Awakened series
The History: Thousands of years ago, a renegade faction of angels abandoned the spiritual realm and began their inhabitation of earth. Worshiped as gods for their wisdom and power, they corrupted our realm and altered the course of human civilization. Amidst the chaos of a dying world, a prophet foretold the awakening of a human who would bring an end to this evil. But the cataclysmic destruction of our planet forced a rebirth of humanity. The prophecy faded from the memory of our kind and went unfulfilled—until now!

The Awakened: The physical dimension is fractured. What remain are numerous worlds moving simultaneously through time, sharing a common history, connected by a guarded portal.

On a parallel Earth, in the city of Bastul, Colonel Adair Lorus disappears while investigating the death of an informant, triggering a series of events which will tear his family apart and set in motion the resolution of an ancient conflict. His son, Kael, sentenced to death after rising up against the cruel leadership of his new stepfather, is rescued from prison and trained in the arts of war by a mystical order of clerics. Excelling in every aspect of his training, Kael inwardly struggles to give himself fully to the methods of his new family, or the god they worship. Maeryn, bitter over the disappearance of her husband and supposed execution of her son, fears for her life at the hands of her newly-appointed spouse. Finding comfort and purpose in her unborn child, she determines to undermine his authority by reaching out to an underground social movement known as the Resistance. After being forced from his home, Kael’s former mentor, Saba, uncovers a clue to Adair’s disappearance. Sensing a connection to his own forgotten past, Saba begins an investigation that leads to the discovery of a secret military organization operating within the Orudan Empire.

In Book One of his Amazon bestselling debut series, Jason Tesar launches an epic saga that journeys from earth’s mythological past to its post-apocalyptic future, blending the genres of fantasy, science fiction, action adventure, and military thriller.


Review:
As I was marshaling my thoughts for this review I happened to read (or re-read) the blurb. Although the blurb gives a “history” for background, that same history is not clearly portrayed by the book. There are several characters to follow and I found each thread interesting. They all start at one family setting but I was curious how, if or when, they would come back together.

The local Governor of the city of Bastul, Colonel Adair Lorus, sets off to investigate the murder of a resourceful friend. He steps into a situation that he never expected and was unprepared for. As he tries to escape he disappears only to reappear at the very end of the book when he tumbles into an even stranger world.

Adair’s wife, Maeryn, and young son, Kael, are left at the fortress which is commandeered by an unknown, arrogant and cruel new governor. Kael is sentenced to death after he attacks the governor for beating a young slave boy. Before being killed Kael is spirited away to a dismal mass prison where he and others are rescued and taken to a monastery. There they are given training and education, preparing them to be warriors for the ‘one god’. Kael excels in his lessons through the years but he can’t commit his full loyalty as he senses deception.

Meanwhile Maeryn suffers through the loss of her husband and son. When she finds she is pregnant she is determined to protect the child. As the years pass she begins to secretly help the Resistance movement against the empirical and governor leaders.

Kael’s aged but wise tutor, Saba, is banished from the City. He tries to find the origin of the arrowhead that Adair left behind. After a number of years he is kidnapped and brought to a hidden compound. He meets an old friend, who is now his enemy. Apparently Saba has lost years of memory and his enemy is intent on digging out secrets of Saba’s old betrayal.

The story is written with simplicity so it read reasonably quickly. I enjoyed the interesting characters and the movement and activity in the story. Although it is engaging I was troubled that it doesn’t tie together so that I could understand what was happening and where the author was taking the story. This made for a disappointingly loose ending. It seems as though the reader has to read on in the series to find the connections. There is a time travel element that is just touched on at the end of this book. Although I enjoyed the story I am not so invested that I would soon get the next book. I would recommend the story to those who enjoy fantasy with the expectation of continuing in the series.