Audible Review: Citizens of London: The Americans Who Stood with Britain in Its Darkest, Finest Hour by Lynne Olson

This is an excellent portrayal of key Americans during WWII. History that we didn’t learn in school made ‘alive’.

Citizens of London: The Americans Who Stood with Britain in Its Darkest, Finest Hour
Written by: Lynne Olson
Narrated by: Arthur Morey 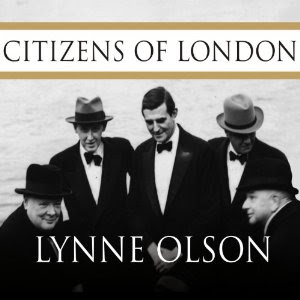 Publisher's Summary
In Citizens of London, Lynne Olson has written a work of World War II history even more relevant and revealing than her acclaimed Troublesome Young Men.
Here is the behind-the-scenes story of how the United States forged its wartime alliance with Britain, told from the perspective of three key American players in London: Edward R. Murrow, Averell Harriman, and John Gilbert Winant. Drawing from a variety of primary sources, Olson skillfully depicts the dramatic personal journeys of these men who, determined to save Britain from Hitler, helped convince a cautious Franklin Roosevelt and a reluctant American public to support the British at a critical time. The three---Murrow, the handsome, chain-smoking head of CBS News in Europe; Harriman, the hard-driving millionaire who ran FDR's Lend-Lease program in London; and Winant, the shy, idealistic U.S. ambassador to Britain---formed close ties with Winston Churchill and were drawn into Churchill's official and personal circles. So intense were their relationships with the Churchills that they all became romantically involved with members of the prime minister's family: Harriman and Murrow with Churchill's daughter-in-law, Pamela, and Winant with his favorite daughter, Sarah.
Others were honorary "citizens of London" as well, including the gregarious, fiercely ambitious Dwight D. Eisenhower, an obscure general who, as the first commander of American forces in Britain, was determined to do everything in his power to make the alliance a success, and Tommy Hitchcock, a world-famous polo player and World War I fighter pilot who helped save the Allies' bombing campaign against Germany. Citizens of London, however, is more than just the story of these Americans and the world leaders they aided and influenced.
©2010 Lynne Olson (P)2010 Tantor


Review:
This is history that I have never heard. Lynne Olson does a grand job of following a handful of Americans that made an impact in the events of World War II (WWII). Although the story focuses on the perspective of three primary players, there are other important characters discussed as well. The three primary men are John Gilbert Winant, a politician, Edward R. Morrow, a journalist, and Averell Harriman, a millionaire socialite. Each of these had a unique contribution, growth and experience that was fascinating to follow. All three developed close relationships with Winston Churchill and were influential in encouraging Franklin D. Roosevelt to commit to aiding Britain even though they were unable to get the United States to enter the war until the attack on Pearl Harbor in November, 1941.

Wianant was a likeable, shy, idealist Republican politician. He was a three term Governor of New Hampshire and the first head of the Social Security Board, a program evolving from the “Townsend Plan” which he strongly promoted. He became a friend of all Britains as the deeply personal and committed US Ambassador to Great Britain during the war years. Olson was able to portray his brooding passion and deep friendliness. She even conveyed the frustration and tragic waste of his death.

Morrow became the ‘voice of London’ as the American broadcaster for CBS. He was an on-the- scene correspondent who brought the blight of war torn London into the homes of Americans. Just as his reporting must have made the war more real to listeners, this audiobook made the war more real for me. The descriptions of the bombing on London and the evacuation and hardships of the citizens, left homeless, jobless and hungry, gave me a new appreciation for the fact that Americans have been privileged to live mostly free of the devastation of war on our own soil.

Averell Harriman was my least favorite of these characters as it first appeared that he was always seeking political influence through his social position and money. However he had provided a special intermediary role. He was appointed by FDR as a special envoy to Europe in the spring of 1941 and helped coordinate the Lend-Lease program which brought desperately needed supplies to Britain and allies. He became Ambassador to the Soviet Union in1943 trying to balance the interests of Europe allies as they fought the war on many fronts.

I think in school history we get a very condensed, shallow view of wars of the past… and then, of course, as years go by we forget even those things we learned. I choose this audiobook because it looked like it would present an interesting view and I was not disappointed. I knew of Churchill, FDR and Eisenhower of course. And I had heard of Murrow probably through my journalism schooling. The other participants were new to me. I was not pleased to learn about the affairs between the players and the Churchill women but it is an interesting part of the history I would not otherwise know. What I found truly wonderful was the in depth views of these men, and the women involved, as they faced the struggle of war.

I appreciated Ms. Olson’s attention to details including the feelings of hope, frustration, anger and despair, as they impacted on the participants and the citizens around them. I highly recommend this audiobook for those who have any interest in a detailed view of American lives as they shared in the London experience of WWII.

Audio Notes: Arthur Morey’s authoritative and smooth narration makes this an awesome listening experience. The audiobook is longish so I am thinking the book is longish which is all the more reason for me to listen rather than read. This is well worth the audible credit!


I had this in my Audible library since 2011 and it is part of my 2015 TBR Pile Challenge. It also qualifies for my Audio Challenged and my Full House Challenge.
Posted by Martha Eskuchen at 5:30 AM