Book Review: Love in the Details: A November Wedding Story (A Year of Weddings Novella) by Becky Wade

This is a lovely second-chance romance.
Love in the Details: A November Wedding Story
(A Year of Weddings Novella)
by Becky Wade 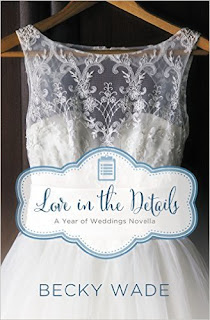 Holly ended things to give him a better life, but she was the future he’d always dreamed of.
Eight years have passed since Holly last saw her high school sweetheart, Josh. Now the wedding of Josh’s best friend has brought him back to Martinsburg, Texas. His duties as best man and Holly's as the church's volunteer wedding coordinator link them together. As they work behind the scenes to plan a beautiful November wedding for their friends, they're forced to confront painful reminders of what might have been.
Holly broke up with Josh all those years ago in an attempt to ensure his future success. However, she never told him the true reason behind her actions and now must decide whether to keep her secret hidden. She's terrified of letting herself fall for him because she barely managed to piece her life back together after losing him the last time.
Not a day's gone by since Josh parted from Holly that he hasn't thought about her. The pain of the past eight years has been too much to bear and he doesn't want to make himself vulnerable to her again. But the more time he spends with her, the harder it is to deny the love he still has for her.
Will Josh and Holly risk their hearts on the hope that God's timing really can be best?


Review:
Holly and Josh were high school sweethearts. He was the school geek but she still loved him. When Josh went away to college at MIT, Holly became convinced that she would only hold him back so she broke up with him. She hasn’t found a man to love since Josh, but she prays that God will bring the right man to her.

Josh was stricken when Holly broke up with him giving no reason. He dedicated himself to his studies and became a successful businessman based out of Paris. He is returning home for the first time in eight years to be the best man for his friend. He tried to prepare himself to see Holly and walk away from her. Instead he ends up working with her as the church wedding coordinator and a local guide to the community.

Holly tries to protect her heart from falling for Josh feeling that she isn’t worthy of his sophisticated lifestyle. She is afraid to hope he could learn to care for her again. Josh is cautious to trust knowing how badly he was hurt before. Is there a chance for them to overcome their past and find a second chance at love?

This story is lovely, short and sweet. I was smiling with an occasional wince at the painful moments and fears. Their reactions are natural with emotions that are very real to life. I enjoyed the gentle faith that helped to shape their characters and ultimately their relationship. The writing style is light and made for easy reading. I would be interested in reading more from Ms. Wade after enjoying this short taste of her work. If you are a reader who enjoys warmth, inspiration and second chances, I recommend you pick up this sweet book.


I received this through NetGalley for an honest review. It is part of my NetGalley Challenge.
Posted by Martha Eskuchen at 2:21 PM