This has crisp writing, compelling characters and a good plot with intrigue and danger. There is just a bit too much sex for my tastes.
Kiss of Midnight: A Midnight Breed Novel (The Midnight Breed Series Book 1)
by Lara Adrian 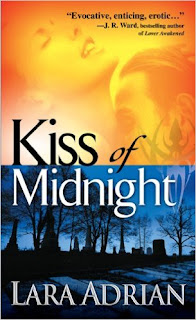 He watches her from across the crowded dance club, a sensual black-haired stranger who stirs Gabrielle Maxwell's deepest fantasies. But nothing about this night--or this man--is what it seems. For when Gabrielle witnesses a murder outside the club, reality shifts into something dark and deadly. In that shattering instant she is thrust into a realm she never knew existed--a realm where vampires stalk the shadows and a blood war is set to ignite.
Lucan Thorne despises the violence carried out by his lawless brethren. A vampire himself, Lucan is a Breed warrior, sworn to protect his kind--and the unwitting humans existing alongside them--from the mounting threat of the Rogues. Lucan cannot risk binding himself to a mortal woman, but when Gabrielle is targeted by his enemies, he has no choice but to bring her into the dark underworld he commands.
Here, in the arms of the Breed's formidable leader, Gabrielle will confront an extraordinary destiny of danger, seduction, and the darkest pleasures of all. . . .


Review:
Gabrielle is a photographer who is drawn to the lonely, abandoned and shadowy images of buildings and other aspects of life. One night she reluctantly goes to a club with friends where she shares glances across the room with a dark, brooding man. As she leaves the club she witnesses a savage murder. She manages to get a few pictures on her cell phone as she flees the alley. The police only mock her when they find no evidence of the gruesome scene. But someone heard her and believed her and now she is a target of those dark forces.

Lucas Thorne is a man of darkness and violence himself. But unlike the Rogue killers of his kind he is a Breed Warrior – one of a few specially chosen vampires who are committed to protecting their race by keeping the evil element under control and hidden from public exposure. A few of his closest brethren have Breed mates, the specially marked human females who become bonded with their vampire mate and produce children. Lucas has never been interested in finding a mate as his duties as a warrior protector has been his driving force for hundreds of years.

Lucas saw Gabrielle escape from the Rogues he was hunting. He needs the images on her phone and he suspects the Rogues will come after her too. He is drawn to her sensual beauty and then is alarmed to discover secrets even she is unaware of. Now there are multiple reasons to protect her and bring her to his compound even though he is facing a Rogue uprising and her nearness causes him confusion that brings him near the edge of his own control.

Gabrielle and Lucas are both conflicted characters and I found their struggle and story compelling. They sense they shouldn’t be drawn to each other but the pull is irresistible. I loved the background story with danger, action, tension and the intrigue of betrayal. There are some different vampire aspects that added interest. However, I was a little wary of this title as I suspected it might be pretty graphic sexually. My suspicions were right as it is full of sexual scenes that were just a bit too many and too erotic for my tastes. The writing is crisp and fast moving and if it wasn't so edgy I might have continued with the series. Those paranormal romance readers who enjoy fast-paced tension and a steamy, sexual ride should enjoy this book and the series.


This is from my free Kindle Library as a free book downloaded in 2009. It is part of my 2015 TBR Pile Challenge list and "K" for the Alphabet Soup Challenge.

I owe a copy of this ebook or a $5.00 GC to LILLY based on my Giveaway back in December 2014. Sorry it took so long for me to get around to reading this one! I had to laugh at myself when I went back and found the giveaway post. I don't think I even got beyond posting that first group of 23 books although I plenty more to go! I may host a few more "help me pick" giveaways over the next three months as I prepare title for next year's TBR pile list.
Posted by Martha Eskuchen at 5:30 AM