This wasn’t the strongest episode but I thought it still moved forward well.
The Remaining: Allegiance
Written by: D. J. Molles
Narrated by: Christian Rummel 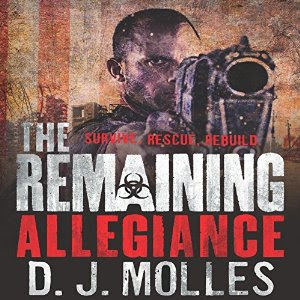 Publisher's Summary
This is the fifth novel in the action-packed series following Special Forces Captain Lee Harden and a group of survivors struggling to make their way in a ruined world. After a bacterium has turned 90 percent of the population into a ravenous horde, Lee must complete his mission: SURVIVE, RESCUE, REBUILD.
©2015 D.J. Molles (P)2014 Audible Inc.


Review:
This is the fifth novel in the series. Lee is trying to recover from his injuries and struggles. He is trying to help with the state of leadership at Camp Ryder, while trying to figure out how he can help the two convoys that went east and west.

LaRouche has gone missing from the east group leaving Wilson to continue the scrambling efforts to destroy the bridges over the Roanoke River. The team is on a desperate race to stay ahead of the infected hordes they can hear and see on the north side of the river.

Harper’s team has reached Eden only to discover that they may be too late to prevent the spread of the infected hordes there. His team has been joined by a group of Marines although there is some friction between the Camp Ryder team and the Marines. An impulsive and angry decision puts one team member down with a broken leg. But real trouble appears when a betrayal takes place.

While we follow the usual characters, we also get to follow new characters. Abe and Luke were part of Project Hometown until they got new orders. They have begun to question if they are doing the ‘right’ thing. They are moving in one direction but become captives of a new element in the story.

Things move quickly in this episode following five different threads. There is still good action and much conflict as personalities continue to mold with the new realities and moralities of the situation. Sides are being drawn between those who support the concept of Project Hometown and those who are committed to follow the new President with the plans to abandon the southern states to the hordes. Lee and Camp Ryder have to face the fact that they cannot succeed without gaining new alliances.

This installment has a bit too much internal introspection that creates strange pauses. Still, I am completely wrapped in this series and I am anxious to listen to the next book to find out what happens. (There is still a lot of violence and language continuing in the series although maybe not as heavy or noticeable/memorable.)

Audio Notes: I don’t have much new to add regarding the excellent narration by Christian Rummel. I read the two novellas on Kindle and I am glad to be back to audio for the rest of the series. The narration enhances the intensity and entertainment value for me.


I selected this with a September Audible Credit. This adds to my Audio Challenge.
Posted by Martha Eskuchen at 9:37 PM