Book Review: On the Run (The Elijah Project) by Bill Myers

This includes zany action that should fit great with 9-12 year old readers.
On the Run (The Elijah Project)
by Bill Myers (Author), James Riordan (Contributor) 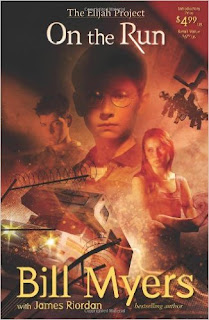 In book one, On the Run, Elijah’s supernatural gifts have drawn the attention of dark forces. Separated from their parents, Zach and Piper (with a lot of help from heaven) must protect their little brother.


Review:
Elijah is a six year old with gifted talents. His teenage brother, Zach, is pretty clueless but his 13 year old sister, Piper, is careful to watch over him. Their parents have had to move several times to protect the family, but especially to protect Elijah. Not only would the public be interested in his abilities but evil people want to use him … or stop him.

Piper has a small crush on one of Zach’s cute friends, Cody. Although she doesn’t think Cody would even know who she is, she learns that he is kinder than his looks would indicate. One of his good friends, Willard, is a young ‘mad scientist/inventor’.

An accident before school brings out Elijah’s talent and puts him in the eyes of the media. Mom and Dad immediately make arrangements to move but they must sneak out of the house to draw away bad guys before the kids come home. The bad guys, a witchy woman, a mindless brute and a skinny, ambitious and evil man, are stumbling but determined.

Zach, Piper and Elijah dodge the bad guys as they head out to find their parents. Cody and Willard show up with the help of some of Willard’s wacky inventions to help the fleeing trio. A mysterious stranger appears unexpectedly just in time to help with a few narrow escapes. During the flight, Zach, Piper and even Elijah, share some Biblical wisdom, learned from their faithful parents.

The story is zany with gruesome, but comical, villains and the fun of Willard’s inventions. I appreciated the clues but thought some of the actions were “duh” or “idiot” moments. However, this is written for an audience age of 9 to 12 and I do think that it would be engaging and fun for that reading level. Not so great for adults unless you really just want some silly antics to enjoy. Also, this book has an open ending as it is just the beginning book in a series that continues with more danger and adventures.


This is another TBR title in my free Kindle library since 2010. It is one of my TBR Pile Challenge books.
Posted by Martha Eskuchen at 12:30 PM