Happy Friday.
As end of last week and early this week posts noted I was struck with a bad cold last Saturday. My husband started getting it on Tuesday. We saw our doctor on Wednesday and started antibiotics. We had this weekend planned out for RV camping and fun with the kids/grandkids at DeSoto Caverns. Driving five hours today was rough on DH but I got to rest a bit and I am feeling better. We are hoping to feel better tomorrow when they all arrive to join us.


TO ENTER FRIDAY PICK:
US Entrants: Leave a comment and tell me WHICH BOOK you would like to get from the Friday Pick lists.
INTERNATIONAL: Leave a comment indicating "Gift Card" (see further comments near the end of the post.)

Thank you to all who entered the October 16 Pick. There were TWO automatic wins this week. Automatic wins are those who requested the book four times without other people asking for that book during those weeks. There were two titles blocked this week and one of those is by the same competing claimers. :-/
AUTO: bn100 gets A Darker Dream
and
CarolL gets Fated


CONGRATULATIONS
to Random.org picked Winners from October 16 Pick:
Linda gets a GC
Mariska gets a GC 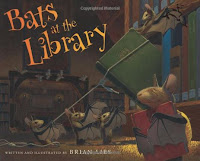 I usually try to stay away from book cover images but I just loved this!
Image found at The Picture Book Teacher.

I am happy to say that so far about 880+ books have found new homes! YAY. I have to update my print out to check the exact number sent out - a few were never claimed. I periodically update the lists - deleting those won. You can still go to the Friday Pick list link to see older posts and the older lists book pictures if you want!