Book Review: Children of the Comet by Donald Moffitt

This is an engaging fantasy dealing with future humans and primitive societies.

Children of the Comet
by Donald Moffitt 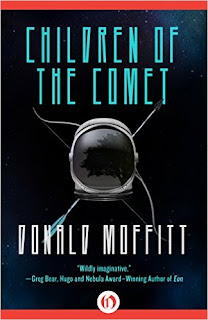 In the far future, on top of a gigantic tree rooted in the ice ball of a comet, a young man’s journey leads to unexpected encounters

In this brand-new cosmic adventure by the author of The Genesis Quest and The Jupiter Theft, Torris, son of the Facemaker, knows only his small community at the base of the great Tree on a comet with almost no gravity or atmosphere. Torris’s daily struggle for survival includes harvesting frozen air to keep breathing, dodging flutterbeasts, and hunting meatbeasts for food. When it comes time to make his vision quest to the top of the Tree, Torris is completely unprepared for what he finds: first, a thieving and hostile fellow quester; then, Ning, a female hunter from a neighboring tree-bearing comet, who has catapulted across empty space in search of food to save her family; and ultimately, alien visitors in a massive starship that has spent billions of years crossing the galaxy.

Shocked at the cultural differences between his home and Ning’s and stunned by the changes precipitated by the arrival of the spaceship, Torris must learn quickly, adapt even faster, and face an uncertain and rapidly changing future unlike anything he has ever imagined.


Review:
Torris is a tall, thin and intelligent young man who lives on a tree comet. He has grown up with the duties and traditions of his tribe. He is now of age, with other young men in his tribe, to go on his vision quest to the top of the Tree. They must each climb alone and not help or receive help. Torris starts out well with his air suit, his warming bug, and bows and arrows to help catch food and fight of predators of the Tree which he expected. He didn’t expect to have another young climber scavenge and scatter his pack. Nor did he expect to run into a female from the nearest tree that would soon be close enough for barbaric bride raids from one tree to the other.

The female hunter, Ning, and Torris should kill each other but that is not what happens. They form a shaky alliance during which they learn about each other’s tribes. Torris is impressed with Ning’s intelligence and skills. Ning is impressed by Torris’ kindness and determination.

Meanwhile, far away, there are people from earth who have developed colonies on distant planets. Two groups do not want to stay with the colony. One of the older generations, led by Captain Joorn, wants to return to Earth to see if the Sun has burned up the home planet. Another group, led by Professor Karn and a group of scientists wants to travel beyond. The two make an agreement that they will take the ship and a habitat and return. Once the Earth bound group are dropped off back in Earth’s galaxy, the professor’s group will move on. During the years of travel not everyone agrees to honor the agreement and struggles arise.

The ship finally arrives at the Milky Way Galaxy to discover primitive communities have found a foot hold in comet trees within the Oort Clouds. The ship inhabitants are able to see the tree people and determine that they must step in.

The characters are unique, including a dolphin with its own contraption that allows movement and communication. Torris and Ning are good characters and they make friends with Joorn's grandson and granddaughter.The theories of science, travel, colonization and society growth are interesting and fit the fantasy. The tree world is well developed and the ship antagonisms are consistent with human behavior.

Although I was a bit confused at the beginning of the story I soon became wrapped in the twin story threads as they shifted in chapters toward a cosmic meeting. There were some alarmingly dumb actions - not too surprising from teens trying to find themselves. The writing is easy and smooth, except perhaps for some quantum discussions that were beyond me. I focused more on the people and less on the scientific theories and found this to be an engaging fantasy. I would likely read more by Mr. Moffitt.


This releases October 13, 2015. I received this through NetGalley for an honest review. It qualifies for my NetGalley Challenge.
Posted by Martha Eskuchen at 5:30 AM