This is another 'zombie' type book that offers more with good characters, action and society issues.
The Remaining
Written by: D. J. Molles
Narrated by: Christian Rummel 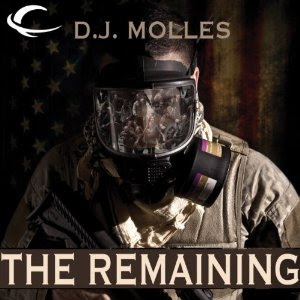 Publisher's Summary
In a steel-and-lead-encased bunker 20 feet below the basement level of his house, a soldier waits for his final orders. On the surface, a plague ravages the planet, infecting over 90% of the populace. The bacterium burrows through the brain, destroying all signs of humanity and leaving behind little more than base, prehistoric instincts. The infected turn into hyper-aggressive predators, with an insatiable desire to kill and feed. Someday soon, the soldier will have to open the hatch to his bunker, and step out into this new wasteland, to complete his mission: Subvenire refectus. To rescue and rebuild.
The Remaining is the first book in the best-selling series, which tells a gritty tale of survival, perseverance and fighting to get back what has been lost.
©2012 D.J. Molles (P)2013 Audible, Inc.


Review:
Captain Lee Harden has had standing orders to wait in a “hole” in the event of a country disaster. He has been ordered there a few times but has always received instructions to resurface after a short time. This time however he is waiting for communication from his superior which doesn’t come. The last news that Lee heard was that a plague has infected 90% of the population leaving them brutal predators, spreading the decease by biting others. After a time of silence Lee opens his Orders telling him that is one of a select group of soldiers who are to surface to rescue and gather survivors to rebuild.

Lee emerges from his safe fortress and begins to look for other healthy survivors. Initially he finds horrible evidence of the infected hordes. If that is not bad enough he finds uninfected stragglers only to discover some have already submitted to evil and power becoming wicked men preying on the weak, ransacking homes and threatening the few remaining humans. Lee loses friends and new acquaintances while he tries to find a group that he can help and that will accept his help.

I really like Lee’s character -- he is strong and smart but not invincible. He copes by reminding himself that "the only easy day was yesterday". He has a basic sense of honor that allows him to talk before shooting even though that can be risky. There is plenty of action in the story along with an interesting picture of how society might break down in a plague infested environment.

It seems I am reading a few zombie books lately when that wasn’t necessarily my intent. This is not really "zombie" as these are plague infected beings who are aggressive but do not come back to life when killed. I am glad that this has more story beyond the "infected" hordes. This first book sets up the situation and leaves the ending open to continue in the next book. This might annoy some people. Since I already had book three I did get book two so I could see how the series progresses. Zombie fans should definitely try this but I also think those who like end of the world, military action might like it too.

Audio notes: Christian Rummel provides a very solid narration. He really nails Lee’s personality and manages to convey the other characters with appropriate voices and nuances. The narration enhanced the story for me and I will be listening to the next books too.


I had this in my Audible Library from Feb 2015. It is part of my Audio Challenge.
Posted by Martha Eskuchen at 10:56 PM