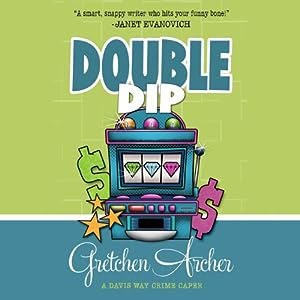 Publisher's Summary
“A smart, snappy writer who hits your funny bone!” (Janet Evanovich).
It’s Davis Way’s first slot-tournament season. And it may be her last. Things are dicey at work. A personal assistant goes missing, a little old lady goes on a suspicious winning streak, and a Bellissimo executive goes gaga for Davis. She follows a disappearing slot-tournament player trail to the So Help Me God Pentecostal Church in Beehive, Alabama, then jumps headlong into a high stakes holy scandal. She’s on a losing streak at home, too. Her days, nights, and dinners run together, as Davis juggles a revolving door of uninvited guests, namely her rotten ex-ex-husband, Eddie Crawford. And Bradley Cole thinks three’s a crowd. The worst? Davis doesn’t feel so hot. Maybe it’s the banana pudding, or maybe it’s a little bundle of something else. Double Dip. A reckless ride in the fast lane, and Davis Way can’t find the brakes.
©2013 Gretchen Archer (P)2014 Audible, Inc.


Review:
Davis succeeded in her first major security assignment at Bellisimo Resort and Casino in Biloxi. Now she faces another major event: the frenzied slot-tournament where a little old lady is on a winning streak. The few leads seem connected with a Pentecostal Church in Beehive, Alabama.

Bianca’s personal assistant has gone missing which puts Davis repeatedly at the beck and call of the hoity wife of the Casino boss. If that isn’t enough trouble, Davis has to juggle visitors and troubles at home. Davis decides to use her ex-mother-in-law to test a theory that the elderly are tied to the Church and fixed wins. This ends up allowing her ex-ex, Eddie, to show up unexpectedly and uninvited. Bradley doesn’t like the picture and declares an ultimatum. Meanwhile there are upset tummies - some caused by a food item that leads to death. Fortunately, or not, that isn’t Davis’ trouble and she can’t figure out how to tell Bradley there are more concerns than just her ex-ex..

There is more fun in this installment of Davis’ hijinks. She has a new co-worker, Fantasy, a woman who was Davis’ corrections officer during her incarceration in book one. Fantasy is a good ‘Mutt’ (tall, skinny and black) to set off Davis’ ‘Jeff ‘(short, curvy and redheadish).

There is plenty of emotional trouble for Davis as well as mystery to solve. The action and wit keep the reader/listener well entertained. Once again I was very pleased to have the third book ready when this one finished.

Audio Notes: The narrator changed between book one and two. Sometimes that is a major problem but it wasn’t terrible this time. Amber Benson does a good job with the voices and the story. I didn’t find her “asides” quite as effective as the first narration but everything else was just fine. I still enjoy this in audiobook format which makes for fun, quick entertainment.


I received this from Claire McKinneyPR for an honest review. This adds to my Audiobook Challenge.
Posted by Martha Eskuchen at 5:30 AM