Book Review: Footsteps in the Sky by Greg Keyes

This is an unusual story - entertaining and thought provoking.
Footsteps in the Sky
by Greg Keyes 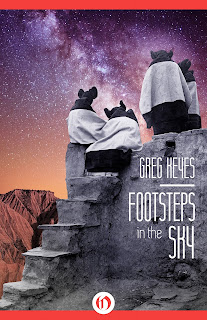 The pueblo people who landed on the Fifth World found it Earthlike, empty, and ready for colonization . . . but a century later, they are about to meet the planet’s owners

One hundred years ago, Sand’s ancestors made the long, one-way trip to the Fifth World, ready to work ceaselessly to terraform the planet. Descendants of native peoples like the Hopi and Zuni, they wanted to return to the way of life of their forebears, who honored the Kachina spirits.

Now, though, many of the planet’s inhabitants have begun to resent their grandparents’ decision to strand them in this harsh and forbidding place, and some have turned away from the customs of the Well-Behaved People. Sand has her doubts, but she longs to believe that the Kachina live on beyond the stars and have been readying a new domain for her people.

She may be right. Humans have discovered nine habitable worlds, all with life that shares a genetic code entirely alien to any on Earth. Someone has been seeding planets, bringing life to them. But no other sign of the ancient farmers has ever been discovered—until one day they return to the Fifth World. They do not like what they find.

Originally written in 1994, Footsteps in the Sky is finally being released in digital form by Open Road Media.


Review:
Sand is a young woman of the pueblo clan in the rough interior country of the Fifth World. One hundred years earlier,Sand’s ancestors made the move to this new planet. Those who settled in the interior work the land and follow the legends and traditions, including religious beliefs honoring the Kachina spirits. These people honor the memories and stories of their ancestors, native tribes like the Hopi and Zuni, who came from earth.

There are more ambitious men and women who control the coast and the technology they have available. This clan has put the simple, native beliefs, fears and traditions aside. They plan manipulations to increase their power. They know there are alien forces from earth that will someday return to claim the planet. But there is a different alien force that is orbiting the planet in three ships. The ambitious coastal people hope they can make contact with these hovering aliens to help them keep the planet by fighting the earth-handlers. However, the inhabitants do not realize the danger they face from the unknown aliens.

This story started a little slowly but once I realized the dynamics of the tribes and alien elements I found it fascinating. In essence this tells the story of two societies vying for the planet - not just two on the planet but two alien species in orbit as well. There is thought provoking supposition on how long term artificial intelligence might act when trying to follow its directives or meet new changes.

There is history to give fullness to the Kachina traditions but then one descendant line changes the god to fit their views and needs. There are two spies among the natives and it is interesting the different way they react and interact after many years of insertion. I didn’t care for the casual sex and bad language although I suppose it fit the particular characters. On the other hand, I was struck by some very profound observations of human nature - motives, desires and ability to love and sacrifice.

This is an unusual tale that is full of conflict, action, betrayal and glimpses of love and sacrifice. I recommend this to readers who would enjoy a space adventure that includes a psychological study.


I am glad I selected this at NetGalley. It is part of my NetGalley Challenge.
Posted by Martha Eskuchen at 5:30 AM