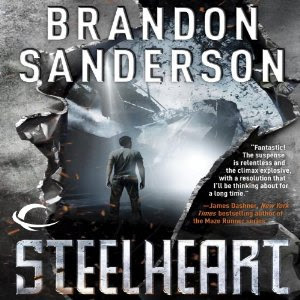 Publisher's Summary
From the number-one New York Times best-selling author of the Mistborn Trilogy, Brandon Sanderson, comes the first book in a new, action-packed thrill ride of a series - Steelheart. Ten years ago, Calamity came. It was a burst in the sky that gave ordinary men and women extraordinary powers. The awed public started calling them Epics.
But Epics are no friend of man. With incredible gifts came the desire to rule. And to rule man you must crush his wills.
Nobody fights the Epics...nobody but the Reckoners. A shadowy group of ordinary humans, they spend their lives studying Epics, finding their weaknesses, and then assassinating them.
And David wants in. He wants Steelheart - the Epic who is said to be invincible. The Epic who killed David's father. For years, like the Reckoners, David's been studying, and planning - and he has something they need. Not an object, but an experience.
He's seen Steelheart bleed.
And he wants revenge.
©2013 Dragonsteel Entertainment, LLC (P)2013 Audible Inc.


Review:
Ten years ago “The Calamity” struck earth in the form of a flash in the sky which left certain men and women with superhuman powers. Normal people hope that these superhumans, called Epics, will help the world. Unfortunately the super power gifts that make them strong also corrupt them by increasing their drive to rule over others, usually in tyranny and terror.

David was only eight when he saw his first two Epics. He witnessed his own father, as well as everyone else in the bank, ruthlessly struck down by Steelheart. But David saw something that no one else saw – he saw Steelheart bleed. David became the sole survivor and he lived planning his revenge. David spent the next ten years studying the strengths and weaknesses of every Epic. He also studied the skills of the Reckoners, the underground rebel group - the only ones- who dare to challenge the Epics.

David manages to get into a rebellion skirmish so he can join the Reckoners. The rebellion team isn’t looking for new recruits who just pop up. Initially they don’t know if they can trust David but slowly he convinces them that he has a wealth of knowledge, particularly knowing the vulnerabilities of the Epics, that will help the Reckoners in their battles.

Each of the Reckoners has a particular battle skill. Slowly they share their skills with David as he shares his knowledge with them. They hide in unfinished tunnels below Newcago (what is left of Chicago) as they pull together a plan to call out Steelheart. They have to get him face to face to test the several theories they have as to his vulnerability.

There is plenty of action in this story which is very reminiscent of a comic book with the good guys battling the evil super villains. The leader of the Reckoners, "Prof", is an older fellow with mysterious wisdom and inventions. There is a minor romantic element as David crushes on one of his teammates even though she tends to scorn his youthful geekiness. I enjoyed the characters, the fast-paced action and the clever plot twists. I found the total package very entertaining and will want to read more by this author. (I have the Mistborn trilogy and just have to decide if I will read those next or get more in the Reckoner series.) I recommend this to young, and older, adult readers who enjoy comic book style action and twists.

Audio Notes: This was an excellent listen. MacLeod Andrews does a super job capturing the different personalities both human and Epic. His narration made the story come alive for me and I could almost picture it as a comic book action strip. If you are a sci fi action reader who enjoys audio I highly recommend this in audio for strong entertainment.


This was from 2013 in my Audible library. This qualifies for my Audiobook challenge as well as being part of my TBR reading.
Posted by Martha Eskuchen at 10:23 PM