This is a fun, entertaining romp and good audio listen. 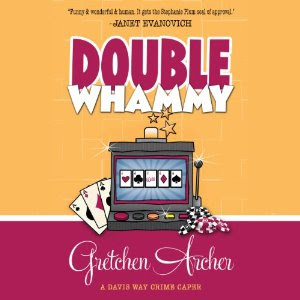 Publisher's Summary
Davis Way thinks she's hit the jackpot when she lands a job as the fifth wheel on an elite security team at the fabulous Bellissimo Resort and Casino in Biloxi, Mississippi. But once there, she runs straight into her ex-ex husband, a rigged slot machine, her evil twin, and a trail of dead bodies.
Davis learns the truth, and it does not set her free - in fact, it lands her in the pokey. Buried under a mistaken identity, unable to seek help from her family, her hot streak runs cold until her landlord, Bradley Cole, steps in. Make that her landlord, lawyer, and love interest. With his help, Davis must win this high-stakes game before her luck runs out.
This book is part of the Henery Press Mystery Series Collection, if you like one, you'll probably like them all! Double Whammy is the first book in the Davis Way humorous mystery series.
©2012 Gretchen Archer (P)2013 Audible, Inc.


Review:
Davis Way ('it's a name, not a place') is a young thirtys, diminutive (under 5'3") ex-small-town cop from Pine Apple, Alabama. Davis worked under the police chief, her beloved father, until a huge, ugly divorce blow-up, including gun shots, resulted in her being fired. It happened the dust up was her second divorce from her now ex-ex husband, the snake, Eddie. After a year of unemployment Davis finally lands a job as elite security in the Bellissimo Resort and Casino in Biloxi, Mississippi. They plan to use her unique abilities which include being a double for the boss’ high maintenance, nasty-tempered wife, Bianca. Since she is able to work well with disguises, Davis’ employment is kept low-key and she is assigned to various tasks to spy on other workers and guests and casino players.

Davis is happy to have a job even if she is nervous about her new co-workers. She has a hard time remembering names so she tends to give everyone nicknames. The two bulky brusers she works with become “Big Teeth” and “No Hair”.

Davis’ initial assignment is to determine who is cashing in on the Double Whammy jackpot machines and how they are doing it. She is dismayed when her research reveals that the most recent winner was her ex-ex and somehow he was connected with Bianca. Now she has to figure out how to disclose the details while trying to keep her distance from Eddie.

While pulling together clues Davis discovers a taciturn cab driver, George, whom she coerces to assist her. He gives her a few warnings which Davis just brushes aside. Davis finds herself a condo to rent so she will have someplace not under the surveillance ears and eyes of her employers. She begins to fall for her handsome landlord, Bradley Cole, even before she meets him. She falls head over heals when he shows up in person to rescue her from a jail mix-up when no one will identify her true name.

Gretchen Archer does a great job of creating quirky and fun characters. The southern setting provides extra material for humor. The story moves at a good pace providing a nice mix of action, personal interest and humor. I was glad to have the next two stories to listen to when this one finished. I recommend this to readers who enjoy humor with the mystery and a female PI.

Audio Notes: Dina Pearlman does a good job with the narration. She manages to capture the southern, small town character of Davis as well as the other male and female characters. I do think this would be a fun read but I recommend the audio as a fun listen to those who enjoy audiobooks.


I received this audiobook, together with the next two, from Claire McKinneyPR, for an honest review. This adds to my Audio Challenge.
Posted by Martha Eskuchen at 5:30 AM