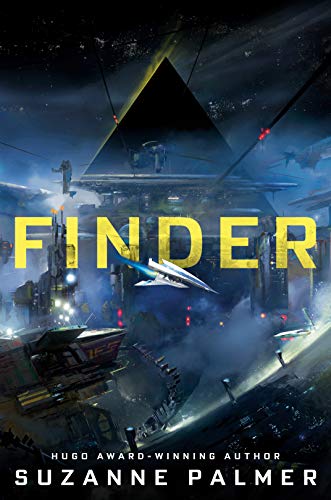 Fergus Ferguson has been called a lot of names: thief, con artist, repo man. He prefers the term finder.
His latest job should be simple. Find the spacecraft Venetia's Sword and steal it back from Arum Gilger, ex-nobleman turned power-hungry trade boss. He’ll slip in, decode the ship’s compromised AI security, and get out of town, Sword in hand.
Fergus locates both Gilger and the ship in the farthest corner of human-inhabited space, a backwater deep space colony called Cernee. But Fergus’ arrival at the colony is anything but simple. A cable car explosion launches Cernee into civil war, and Fergus must ally with Gilger’s enemies to navigate a field of space mines and a small army of hostile mercenaries. What was supposed to be a routine job evolves into negotiating a power struggle between factions. Even worse, Fergus has become increasingly—and inconveniently—invested in the lives of the locals.
It doesn’t help that a dangerous alien species Fergus thought mythical prove unsettlingly real, and their ominous triangle ships keep following him around.
Foolhardy. Eccentric. Reckless. Whatever he’s called, Fergus will need all the help he can get to take back the Sword and maybe save Cernee from destruction in the process.


Review:
Fergus is a “finder” which is basically a glorified, trained repo man. He once was considered a hero having saved many lives during an incident on Mars. But he has always suffered survivor’s guilt as the rescue was more the result of a blunder than intended action. Fergus moves along in life as a loner, long since having determined not to get involved with people. He has found that his luck in finding things tends to come with a side of mayhem to those around him. Accordingly, he likes to get in, complete his job, and get out.

Fergus’ current assignment is to retrieve a stolen airship. The ship was specially programmed not to allow outsiders or pirates. However, a brutal trade warlord, Gilder, posed as a buyer and stole the ship during a test flight. Gilder is using the ship to take over a space colony, Cernee, where his burly enforcer henchman is eliminating the leaders of the various communities which are part of the colony hub.

As Fergus approaches Cernee, he meets a wiry, feisty old woman who saves him from death in the cable car they are on. The explosion and ‘Mother’s’ last wish pull Fergus into the middle of the local power struggle. Just outside the colony are hovering alien crafts which keep the locals in fear as they occasionally capture people and return them with unexpected ‘gifts’ and powers.

Fergus makes a few tentative friends… more appropriately allies to help him accomplish his mission. The rescue plan goes far afield which is not uncommon for Fergus’ wild plans. Before he can secure the ship and return it to the shipbuilders he has to face the aliens, rescue an ally’s daughter from Mars and help the locals survive the threat of Gilder.

I totally liked Fegus as a loner who can’t help but rescue others around him. His plans are unconventional which make for fun diversions such as bouncing ball decoys and holographic sparkling pogo airsticks. The characters who step in to help Fergus are interesting as well. There is plenty of action and good humor. The problems that Fergus creates for himself are frustrating and it is not clear how he will get around them in the future. Still, I found the story creative and engaging. I would enjoy more in the series. I recommend this to readers who enjoy fun space adventure.


Source: 2019 NetGalley. This qualifies for 2019NetGalley goal.
Posted by Martha Eskuchen at 6:30 AM