This is gently lovely, with romance, mystery and danger. 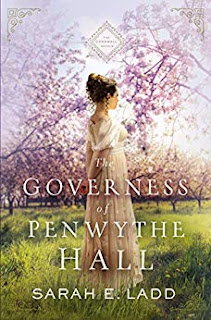 Cornwall was in her blood, and Delia feared she’d never escape its hold.
Cornwall, England, 1811
Blamed for her husband’s death, Cordelia Greythorne fled Cornwall and accepted a governess position to begin a new life. Years later her employer’s unexpected death and his last request for her to watch over his five children force her to reevaluate. She can’t abandon the children now that they’ve lost both parents, but their new guardian lives at the timeworn Penwythe Hall . . . back on the Cornish coast she’s tried desperately to forget.
Jac Twethewey is determined to revive Penwythe Hall’s once-flourishing apple orchards, and he’ll stop at nothing to see his struggling estate profitable again. He hasn’t heard from his brother in years, so when his nieces, nephews, and their governess arrive unannounced, he battles both grief at his brother’s death and bewilderment over this sudden responsibility. Jac’s priorities shift as the children take up residence in the ancient halls, but their secretive governess—and the mystery shrouding her past—proves to be a disruption to his carefully laid plans.
Rich with family secrets, lingering danger, and the captivating allure of new love, this first book in the Cornwall series introduces us to the Twethewey family and their search for peace, justice, and love on the Cornish coast.


Review:
Cordelia has been the governess for her five charges for five years. She obtained the position after her husband died and she determined it was safest for her to be away from her husband’s remaining family in Cornwall. Now the father of the children has died and they, their tutor and Cordelia are being delivered to the children’s uncle Jac in Cornwall.

Jac has inherited the estate of Penwythe Hall from his uncle. His older brother had expected to receive the inheritance which caused estrangement between the brothers. Jac is determined to revive the estate which came with no funds. Jac is working with his workmen in the orchards doing whatever it takes to make the apples grow. He is also having an apple press built as another means to make monies to restore the estate.

Jac is as surprised as anyone when his nieces and nephews arrive. Jac has to struggle learning of his brother’s death and adjusting to the idea that he will raise the children. At least there are trust funds to continue to pay for the tutor and governess. Soon rumors start to spread regarding Cordelia’s family, the Greythornes. They have a dangerous reputation up the coast. Jac becomes worried about Cordelia’s secrecy and then her fear when her brother-in-law shows up at a community party.

Problems arise as the children settle in and other relatives arrive to challenge the guardianship. Danger increases when betrayals and threats, both to the orchards and Cordelia, ratchet up.

I thoroughly liked the primary characters and the children. Expected and unexpected villains added interest. The family element, respect and romance take a few bumps but manage nicely through the conflicts. The reading moved along well as I enjoyed the setting, romance, mystery and suspense. There is a light faith element which I liked also. I recommend this to readers who enjoy clean, historical romance with mystery and suspense.


Source: NetGalley 2019. This qualifies for 2019NetGalley goal.
Posted by Martha Eskuchen at 7:25 PM