I enjoyed the second in this series... good things for one character; not so good for another.
Mirror Gate
The Harbinger Series, Book 2
By: Jeff Wheeler
Narrated by: Kate Rudd 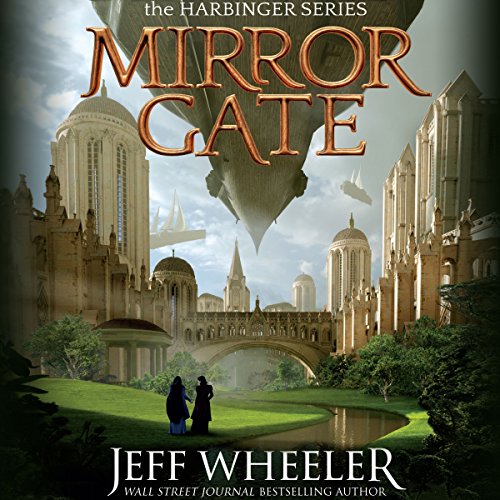 Publisher's Summary
Wall Street Journal bestselling author Jeff Wheeler continues his wondrous Harbinger series in which two young women unite as two worlds approach the brink of war…
Though relations between Princess Seraphin Fitzempress and her father have been strained, Sera’s royal position has remained unchallenged. Filled with self-doubt, she struggles to grasp the Mysteries - her greatest trial yet.
An education in the enigmatic magic is a necessary one, should Sera plan to rise in her station and invoke her powers during war. But the emperor’s death now leaves both Sera and her ambitious father eligible for the throne - a contest the prince regent intends to win. Even if it means an alliance with a rival empire.
Sera’s hope lies in Cettie, a waif raised in the world below, whose life has intertwined with Sera’s in the most unexpected ways. The Mysteries come easily to Cettie, and her studies have begun to yield new insight into her growing powers. But those same powers put Cettie in the path of those who would destroy her.
Now as the threat of war ignites and an insidious sickness spreads throughout the kingdom, Sera and Cettie will need to gather their courage and fight for each other’s lives…and for the future of their endangered world.
©2018 Jeff Wheeler (P)2018 Brilliance Publishing, Inc., all rights reserved


Review:
Sera, the Princess, and Cettie, the orphan from the lower world, continue their close friendship. They are nearing the conclusion of their studies of the Mysteries at Muirwood Abby, the most prominent institute in the empire. Cettie has been a strong student helping Sera who has continued to struggle.
Just as the final testing is approaching word comes that the Emperor, Sera’s grandfather, has died. Sera and her corrupt father, who questions her paternity, are the two choses to serve as the new ruler by the privy council. Many know that the prince regent has ruthlessly pursued his ambitions for power and is unlikely to seek any help for the people below their level. Sera is known for her kind heart and her best friend is from the Fells. But she is only 16 and inexperienced in the machinations of court.

Sera is pulled away from school to attend the funeral and meet with the privy council. One of the foreign houses is looking to make a marriage alliance. Sera has a chance to meet the young man but she is set on being the new ruler of her people rather than becoming a bride. Sera has a wise, scheming counselor, but she sometimes fights against his advice. Events tumble around Sera but she has no idea of the betrayals that surround her and she is unable to prevent war when the accusations and threats escalate.

Meanwhile, Cettie comes under attack at the Abbey. Although some think that Sera was the original target it quickly becomes clear that it is Cettie the kidnappers are after. The head of the Abbey, who has been a friend and mentor to Cettie, is seriously injured during the first kidnapping attempt. In order to escape the enemy and pass the final test of the Mysteries, Cettie must face her worst nightmares – the ghosts from her past.

Jeff Wheeler has created an absorbing world of mystery and magic. There are moments of joy and more of bitter fear and sadness. I found the lives and unrequited loves of teenaged girls a little difficult to muddle through although the situations and emotions are realistic enough. The story moves at a good pace, introducing some new and interesting characters, especially those who come along side to help Cettie. I expect to continue the series later in the year. I recommend this to those who like an engaging fantasy.

Audio Notes: Kate Rudd does a wonderful job with the narration. She captures the immaturity of the girls, as well as the emotions. The narration enhanced my enjoyment of the story.


Source: 1/3/19 Free with Kindle Unlimited. This qualifies for 2019Audiobook goal.
Posted by Martha Eskuchen at 5:30 AM