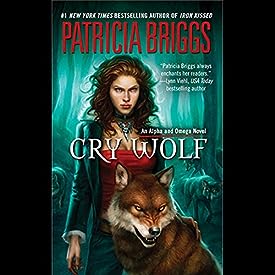 Publisher's Summary
Anna never knew werewolves existed until the night she survived a violent attack...and became one herself. After three years at the bottom of the pack, she'd learned to keep her head down and never, ever trust dominant males. But Anna is that rarest kind of werewolf: an Omega. And one of the most powerful werewolves in the country will recognize her value as a pack member - and as his mate.
©2008 Patricia Briggs (P)2008 Penguin


Review:
Anna suffered pack abuse after first being attacked and turned to a werewolf three years ago. Her pack Alpha, Leo, in an attempt to control her, had given the pack members permission to assault and abuse her. She learned to hide her feelings along with her distrust of the dominant males.

Bran Cornick, the Marrok, (leader of all werewolves), sent his ‘enforcer’ son, Charles, to address problems and to challenge Leo and other leaders of the Chicago pack. Surprising them both, Charles’ wolf claimed Anna’s wolf as mate even as he battled the corrupt werewolves, suffering major injuries.

Bran arrives to take care of the injured Charles and to help move Anna to his home territory. Anna is still intimidated by Bran and Charles as she tries to believe they mean her no harm. Anna is confused when she is told she is a rare werewolf, an Omega. An Omega has unusual strengths and powers if only she can gain confidence to discover them.

Charles is still recovering from his injuries when he is called upon to investigate some suspicious attacks in the nearby mountains. The latest survivor has described the attacker as a ‘wolf monster’. It may be a rogue werewolf or, more dangerously, it may be a purposeful attack.

Bran directs Charles to take Anna with him for the investigation, hoping to give them a chance to get to know each other. They are supposed to just determine the situation, but instead they face a powerful attack with an obsessed character. Not only are their lives threatened but Bran and his entire pack are at risk.

I have read and enjoyed the Mercy Thompson series by Briggs. I was pleased that this book is set in the same world. Anna’s character is allowed to grow into her true strengths which was a nice process to watch. I liked getting a deeper picture of Bran and especially of Charles and the features he inherited from his Native American mother.

There is danger, suspense and shrewd battle situations. I appreciated the fact that the romance is tentative and allowed to mature with sweet rapport rather than sexual heat. I was engaged with the characters and the story. I recommend this to Briggs’ fans and to readers who like strong, but sweet, werewolf stories.

Audio Notes: Holter Graham succeeds in providing wonderful narration. It was a little surprising to hear a male narrator for this, but his performance was spot on. He was able to give appropriate voices and emotions to the characters. The narration enhanced this book experience for me.