This is a fast listen but a little beyond believable.
Noble Beginnings
By: L. T. Ryan
Narrated by: Dennis Holland 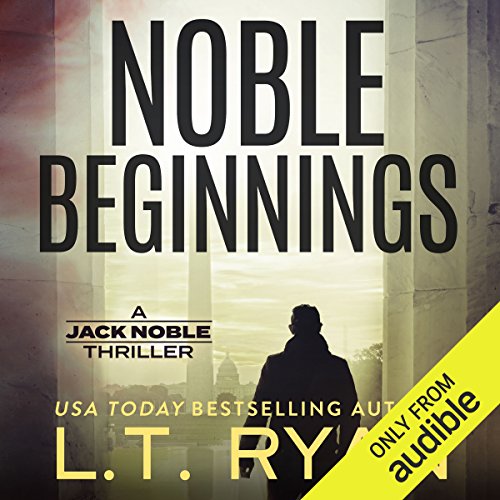 Publisher's Summary
In March of 2002, while the eyes of the world focused on Afghanistan, Jack Noble finds himself on the outskirts of Baghdad, Iraq. A Marine in name only, Jack is on loan to the CIA. Normally an integral part of the team, he finds that he is nothing more than a security detail in Iraq.
Jack and his partner Bear have a run-in with four CIA special agents over the treatment of an Iraqi family. Within hours Jack and Bear are detained.
All Jack wanted was to finish his enlistment and move on with his life. All he did was intervene and save a family from unwarranted violence at the hands of four CIA agents. But he soon discovers that he did far more than intervene. He has placed himself dead square in the middle of a conspiracy that reaches the highest levels of the US government.
This fast-paced political crime thriller by USA Today best-selling author L.T. Ryan will leave you burning through the minutes as Jack races to stop the conspiracy before it claims his life. Fans of Jack Reacher, Mitch Rapp, and Jason Bourne should enjoy Jack Noble.
©2012 L.T. Ryan (P)2015 Audible, Inc.


Review:
Jack, a ‘Marine’ (apparently special forces, specially trained) and his partner, Bear, are on loan to a team of CIA agents in Baghdad. When the CIA leader threatens innocents, Jack balks and gets in the way. He and the leader take it to the street to settle the disagreement by fists. Although Jack gets some good licks in, there are four to one as they have separated him from Bear. When the CIA team is chased off, Jack knows he has really ticked them off. Soon he and Bear are way-laid on their way back to base and find themselves being interrogated and accused of murder. Jack has difficulty reaching his handler and suspects something more serious is afoot.

Jack and Bear narrowly escape one detention cell after another, always suffering beatings and then dodging bullets on the way out. As Jack tries to find answers and get to safety, he begins to realize that someone really wants them, especially him, out of the picture. If only he can figure out how deep or high up the chain the problem goes before it is too late.

I have seen the Jack Reacher movie and read one of the books (by Lee Child). I had hoped this would be similar, but I found it disappointing. I wanted to like Jack as a character, but he was just a bit too quick to fight first and think second for my tastes. I did appreciate his intelligence and the dangerous suspense. I liked how he was able to piece together the threat and address it although the ending wasn’t ideal. It was sad to think that forces would abuse each other – that I suspect is too true. I can only recommend this to readers who like repeated beatings and unrealistic scenarios of escape.

Audio Notes: Dennis Holland does a fair job of narrating. He attempts different voices without creating any particularly interesting characters. The audio made it easier for me to try the series but it didn’t enhance the week story enough to make me want to try more.