This is just the sort of monster/alien hunting action I enjoy for a quick read. 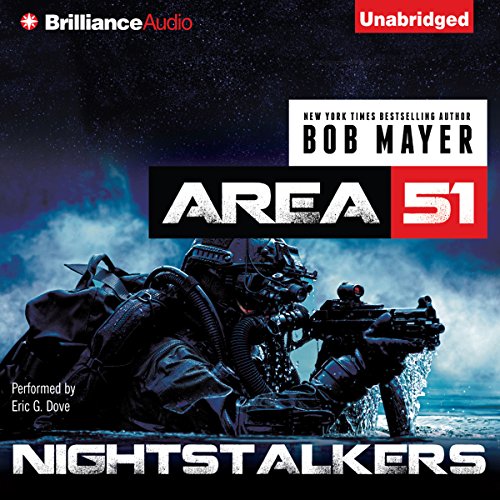 Publisher's Summary
Staff Sergeant Winthrop Carter only enlisted in the army for the steady pay. When he cheated on the Special Forces’ final exam, he never expected his actions would get him drafted into the Nightstalkers - an elite team with a mysterious mission and even more mysterious leader.
For decades, Rifts have been opening and unleashing bloodthirsty alien life forms into our reality. The Nightstalkers’ goal is to shut down these breaches and stop the beings that emerge from rampaging out of control.
While still integrating with his unusual teammates - including a sociopath, a Black Ops washout, and a contemporary MacGyver - Carter gets his first taste of interdimensional action when a Rift opens inside a gated community. With half a dozen deadly invaders threatening the residents, the Nightstalkers must hunt down and eliminate the aliens before they break through containment and wreak havoc on an unsuspecting world.
©2012 Robert Mayer (P)2012 Brilliance Audio, Inc.

Review:
The Nightstalkers are a special, elite team, with a mysterious leader and a mysterious mission. They draw from the best of the army and special forces, seeking those who are willing to commit to a team that puts their lives on the line every assignment. The Nightstalker team has to contain and sometimes annihilate supernatural enemies, creatures that most people don’t know exist. They do their best to minimize collateral damage but are prepared to us excessive force if needed.

The team opens with an action-packed mission to close a dimensional rift and in the process one team member gets pinned with cactus spines causing him to question why he is doing this work. When that injured member walks away, Staff Sergeant Winthrop Carter, is asked to fill the opening on the team.

The team is led by “Moms” and under the direction of a mysterious woman who speaks with a Russian Accent. She has rarely been seen in person as she usually meets with the team in holographic form. The team consists of members who have unusual skills that work together: sharpshooting, troubleshooting, tech expertise, bomb specialist and communications.

Carter is just getting used to the strange team members when they are called out to a wealthy country club subdivision to eliminate the alien “fireflies” which inhabit inanimate objects. The team is setting up ‘undercover’ in one of the elite houses, but a smart, sassy teen from the house across the street is watching every move. “Scout” shows up at the door and offers her services since she knows the neighborhood and clearly the team needs some guidance to fit in.

While they are hunting the creatures to eliminate, they are also concerned about an important artifact that has gone missing and could be misused in the wrong hands. It is soon clear that someone who knows their protocols has brought an attack against the team.

Neither the characters, nor the plot are deeply developed but they are sufficiently set out to make it fun. I totally enjoyed the action and the quirky characters. Scout makes a fun addition. I liked the 1970’s references – they worked for me. I recommend this as an easy read for readers who like monster hunting, military sci fi.

Audio Notes: Eric G. Dove does a nice job with the narration. He distinguishes the character voices, male and female. His voice fits the quick action. The narration added to my enjoyment of the story.


Source: NetGalley 2013 originally and Kindle Unlimited and Whisper Sync pick up 5/4/19. This qualifies for 2019TBR, 2019 NetGalley and 2019Audiobook reading goals.
Posted by Martha Eskuchen at 8:57 PM