This is entertaining particularly if you like military action and political intrigue.

Into the Guns (America Rising)
by William C. Dietz 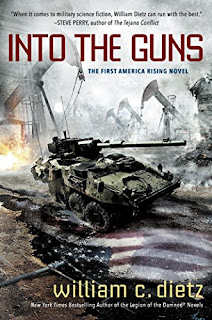 From the New York Times bestselling author of The Legion of the Damned® Novels and The Mutant Files comes the first novel in a post-apocalyptic military science fiction series about America rising from the ashes of a global catastrophe...
On May Day, 2018, sixty meteors entered Earth’s atmosphere and exploded around the globe with a force greater than a nuclear blast. Earthquakes and tsunamis followed. Then China attacked Europe, Asia, and the United States in the belief the disaster was an act of war.
Washington D.C. was a casualty of the meteor onslaught that decimated the nation’s leadership and left the surviving elements of the armed forces to try and restore order as American society fell apart.
As refugees across America band together and engage in open warfare with the military over scarce resources, a select group of individuals representing the surviving corporate structure makes a power play to rebuild the country in a free market image as The New Confederacy...


Review:
Robin “Mac” Macintyre is a First Lieutenant with the Army when meteor strikes change the world. Society has already broken down to include gangs who are willing to thieve for supplies or even destroy for the fun of it. Mac and her scout patrol are assigned to help escort a group of civilian filled buses from Tacoma to Yakima, Washington. They will face murdering marauders and natural disasters and only some of the convoy will get through. Mac becomes the highest-ranking officer and begins to take charge of the troops. She decides to lead them south to Arizona in the hopes of finding warmer climate. Picking up troops and civilians along the way, they become mercenaries hiring out as Mac’s Marauders to establish protection for communities needing relief from the worst of the killing gangs.

US Secretary of Energy Samuel Sloan is caught in Mexico when the disaster strikes. He manages to run and to escape from local thugs to find his way back to the United States. When he is captured in America the authorities don’t believe who he claims to be. He is imprisoned for a time then mysteriously flown out to a meeting with some wealthy businessmen who have taken control of Texas and the vast energy resources in that and surrounding southern states. The tycoons make a proposition to allow Sloan to become the leader of the country under their ‘new order’ which would allow corporations to buy shares in the United States. Sloan doesn’t agree with this new Confederate order. As he is being returned to prison, he escapes again and makes his way east. In a desperate situation he stumbles upon a lawyer who is willing to get him the support he needs to claim his place as President of the United States. Slowly traveling from Maryland to Illinois and in between, they will assemble a like-minded team intent on pulling the country back together, even if that means war with the Confederates.

Mac’s father a Major General and her older sister, Major Victoria Macintyre, are West Point graduates. They disdain Mac for not following in the same path. They are now part of the New Confederacy with Victoria zipping around on a motorcycle as a very cold-hearted officer building a spy network within the Union forces. At least one of these spies in is the forces where Mac’s talents are being used.

These are the three primary characters whose struggles and battles are followed in this book. I liked the fast pace and good action that kept me interested. There is rough language and a good bit of violence. There are inconsistencies and contrived scenes... but, it is fiction, after all. I didn’t allow some of the pointed political ideologies to bog me down nor rile me either way. I actually found the opposing views thought-provoking.

This is the first book I have read by Mr. Dietz and I get the sense I would like some of his other series too. I would recommend this to readers who like post-apocalyptic, alternative history and military action elements as entertainment, not reality. I am glad I have books two and three to continue to see where the author takes the characters and the battles.


I received books one and two from the publisher to read before book three which I received through NetGalley. This qualifies for 2018TBR and Alphabet Challenges.
Posted by Martha Eskuchen at 11:12 PM