This is an entertaining start to a series, although not fully compelling for me.
Cast in Shadow
Chronicles of Elantra, Book 1
By: Michelle Sagara
Narrated by: Khristine Hvam 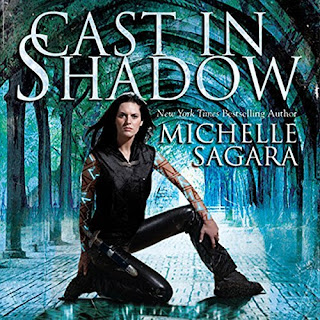 Publisher's Summary
Seven years ago, Kaylin fled the crime-riddled streets of Nightshade, knowing that something was after her. Children were being murdered— and all had the same odd markings that mysteriously appeared on her own skin….
Since then, she's learned to read, she's learned to fight and she's become one of the vaunted Hawks who patrol and police the City of Elantra. Alongside the winged Aerians and the immortal Barrani, she's made a place for herself, far from the mean streets of her birth.
But children are once again dying, and a dark and familiar pattern is emerging. Kaylin is ordered back into Nightshade with a partner she knows she can't trust, a Dragon lord for a companion and a device to contain her powers—powers that no other human has. Her task is simple—find the killer, stop the murders… and survive the attentions of those who claim to be her allies!
Spellbound? Listen to more Chronicles of Elantra.
©2011 Michelle Sagara (P)2011 Audible, Inc.


Review:
Kaylin is a young woman seeking to be accepted as a Hawk warrior. The Lord of Hawks has accepted her into the Hawks for training and she is improving. Kaylin is sent on an assignment but must work with Severn, a childhood friend who has become an enemy to her. Kaylin and Severn are accompanied by a Dragon, Tiamaris. Fortunately, Tamaris, a formidable and quiet man, has great forbearance as he tires to keep Kaylin and Severn from attacking each other.

Children are dying in a bizarre manner in the poorer, crime-riddled section of the city known as Nightshade. Kaylin and Severn are familiar with the Nightshade as they were raised there as orphaned children. Seven years earlier Kaylin and Severn left the area, separately, after suffering the loss of friends who were being killed. The murdered children, then and now, are marked with tattoos which appeared on Kaylin’s skin too. Kaylin discovered that she has unusual healing powers that seem connected to the tattoos appearing on her body. But somehow she brings danger to others. Under the direction of the Hawklord, she is not supposed to use her healing skills without permission and she must keep her powers hidden.

Kaylin braves an audience with the Lord of Nightshade, an immortal who might be an enemy but currently is intrigued by Kaylin. He gives her a mark of protection. Although the mark doesn’t fully bind them as it might others, it is enough to raise questions by other powerful leaders possibly turning allies into enemies. While some try to take Kaylin down she struggles to save the children before another of her friends, a girl kidnapped from the orphanage, is killed.

I appreciate the world building and the different characters. Kaylin was a bit difficult to fully like as she is a messy character: immature, undisciplined and hotheaded. She is independent, a strong fighter and did mature some during the book providing hope for better behavior in future books. I definitely liked the interaction with the other characters, especially Tiamaris. It was annoying that others knew secrets regarding Kaylin’s powers but no one would share with her.

Between the interesting world, characters and action, the story kept my attention. I will likely try the next in the series at some point, although I don’t feel compelled to rush off to get it. I think readers who enjoy strong fantasy and YA characters should give this a try.

Audio Notes: Khristine Hvam does a good job narrating. She gives fitting voices to each character which adds depth to the audiobook. The narration enhanced my enjoyment of the story.


I picked this from my Audible TBR Shelf (2012). It added to my 2017 Audiobook Challenge and Mount TBR.
Posted by Martha Eskuchen at 9:23 PM