This is good entertainment and I will read more in the series.
Storm Front: The Dresden Files, Book 1
By Jim Butcher
Narrated By James Marsters 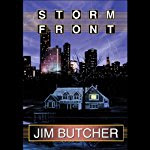 Publisher's Summary
My name is Harry Blackstone Copperfield Dresden. Conjure by it at your own risk. I'm a wizard. I work out of an office in midtown Chicago. As far as I know, I'm the only openly practicing professional wizard in the country. You can find me in the yellow pages, under Wizards. Believe it or not, I'm the only one there.
With rent past due and a decent meal becoming an issue of some importance, Harry needs work, and soon. A call from a distraught wife, and another from Lt Murphy of the Chicago PD Special Investigation Unit makes Harry believe things are looking up, but they are about to get worse, much worse. Someone is harnessing immense supernatural forces to commit a series of grisly murders. Someone has violated the first law of magic: Thou Shalt Not Kill. Tracking that someone takes Harry into the dangerous underbelly of Chicago, from mobsters.
©2000 Jim Butcher; (P)2002 Buzzy Multimedia


Review:
Dresden is a professional wizard who practices good magic. He learned under a master wizard who turned bad. Dresden was accused of killing his mentor, but it was determined it was self-defense. Still his past keeps the enforcer hot on his tail trying to catch him in a wrong.

Dresden is hired to find a missing husband for a distraught wife. While investigating the case, Dresden is called in by Lt Murphy who seeks his consultation in spite of major criticism and cynicism. The scene is gruesome with a couple killed in bed in a manner that can only be supernatural. This turns out to be the first of several similar killings.

Dresden has to skim close to the edge of the magical rules to try figure out how the murders are being done. As he works on the puzzle he gets to have a rare dinner date, only to have the date interrupted by a demon attack.

The murders and the presence of a demon violate the laws of magic leading the biased magical enforcer to believe that Dresden is the murderer. Lt. Murphy also begins to suspect Dresden when he isn’t fully forthcoming with his knowledge. Dresden is in a race to discover the true killer before Dresden has to face the magical counsel or before he becomes the next victim --- whichever comes first.

I enjoyed the magical elements set in a contemporary setting as well as the seemingly impossible dangers the hero faces. The pacing moves well and there is light humor even though parts of the story are full of dark magic. The characters, including “Bob”, have a bit of noir stereotype (think Sam Spade) but this added to the interest. I do hope that there may be a romance interest as the series proceeds.

This is the first story I have read by this well-known author and I look forward to more in the series. I recommend it to readers who like a good urban fantasy.

Audio Notes: James Marsters does an excellent job with the narration. Yes, you can hear him swallow and breathe but it seemed like Dresden was being a natural story teller. Marsters captures the self-deprecating nature of Dresden. The narration made this an extra enjoyable reading experience.