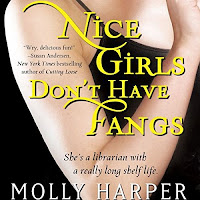 Publisher's Summary
Maybe it was the Shenanigans gift certificate that put her over the edge. When children's librarian and self-professed nice girl Jane Jameson is fired by her beastly boss and handed $25 in potato skins instead of a severance check, she goes on a bender that's sure to become Half Moon Hollow legend. On her way home, she's mistaken for a deer, shot, and left for dead. And thanks to the mysterious stranger she met while chugging neon-colored cocktails, she wakes up with a decidedly unladylike thirst for blood.
Jane is now the latest recipient of a gift basket from the Newly Undead Welcoming Committee, and her life-after-lifestyle is taking some getting used to. Her recently deceased favorite aunt is now her ghostly roommate. She has to fake breathing and endure daytime hours to avoid coming out of the coffin to her family. She's forced to forgo her favorite down-home Southern cooking for bags of O negative. Her relationship with her sexy, mercurial vampire sire keeps running hot and cold. And if all that wasn't enough, it looks like someone in Half Moon Hollow is trying to frame her for a series of vampire murders. What's a nice undead girl to do?
Love in vein: bite into more of Jane Jameson's paranormal exploits.
©2009 Molly Harper White (P)2010 Audible, Inc.


Review:
Nice girl, librarian Jane is having a drinking pity party over losing her job. When she leaves the bar, her car breaks down and she falls into a ditch. A good ole’ boy drives by and shoots her thinking she is a deer. She is left for dead in the ditch but wakes up in a nice bed. She is surprised to be alive but even more surprised to discover she is now part of the undead!

Jane met a tall dark and handsome man, Gabriel, at the bar. Now he has become her sire and he finds her sense of innocence fascinating. Jane’s fresh new looks are attracting other men and apparently raising some jealousy.

Jane is stumbling through the etiquette of the undead as she has a lot to learn very quickly. She is called in front of the Vampire Council within just a day or two for a murder of a man she fought with. It appears someone is setting her up to take a fall.

Attacks and accusations keep mounting as Jane tries to figure out what is going on. Meanwhile she is dodging her parents so she doesn’t have to disclose her new secret. Jane may not get to enjoy her extended life if she doesn’t find the person giving her trouble. But she may be more unhappy than expected when she finally learns the truth.

The story, told in Jane’s self-deprecating voice, is full of humor and sly fun. Jane is an amusing character and the dialog is full of dry wit. Although there is some romance, it is not openly sexual. Molly Harper has a wonderful ability to share this type of light entertainment in her stories. This was a quick listen with the usual fun Molly Harper snark. I recommend this author and this story to readers who like a fun, light read that will make them laugh.

Audio Notes: Amanda Ronconi does a wonderful job with the narration. You can just envision the eye rolls and hear the snark that fits the main character. The narration added to my enjoyment of a fun story.


This was on my Audible shelf since 2012. It qualified for my 2017 TBR and Audiobook challenges.
Posted by Martha Eskuchen at 11:52 PM