Audio Book Review: About a Dog by Jenn McKinlay

This is well written, fun and easy romance but not quite ‘clean’ enough for my tastes. 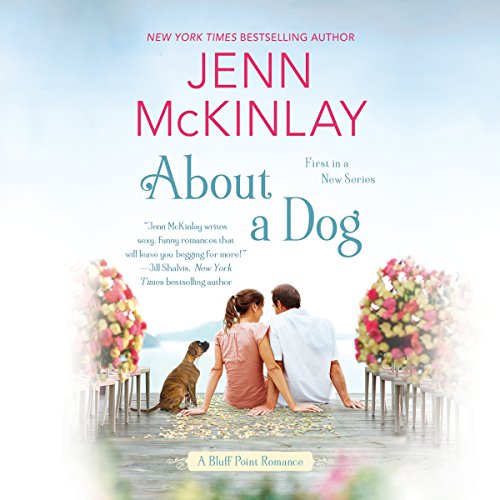 Publisher's Summary
Mackenzie "Mac" Harris fled her hometown of Bluff Point, Maine after being left at the altar and seeking solace in the arms of her best friend's off-limits brother, Gavin. Seven years later, she's back to attend her best friend's wedding, and she figures she's safe now from the mistakes of her youth.
But Gavin, the town's veterinarian, has never forgotten the woman who has always held his heart. And when Mac rescues a stray puppy named Tulip, only Gavin can help. With a little assistance from Tulip, Gavin vows to make Mac realize that their feelings are more than just puppy love....
©2017 Jenn McKinlay (P)2017 Dreamscape Media, LLC


Review:
“Mac” is returning to her home town seven years after she was left at the altar. She is coming back as maid of honor for her best friend, Emma. Emma has asked her to spend time with her younger brother, Gavin, whose girl friend just took off with his bookkeeper. But Emma doesn’t know that Gavin and Mac had a one-night affair on the night Mac was jilted.

Mac figures she can manage around Gavin until she sees him all grown up and responsible. Still, she plans to keep her distance so as not to upset Emma on the week of her wedding. Gavin has other plans that don’t include letting Mac stay distant.

Mac finds a stray puppy and seeks Gavin’s veterinarian services. He is the only one who can help protect the pup when a cruel man claims the dog is his. Gavin takes every opportunity to encourage Mac to see him as something other than her best friend’s little brother.

I enjoyed the premise and for the most part enjoyed the cute characters and fun dialog. Mac is a little uptight and needs to work beyond that while Gavin is just a sweet heart. Tulip, part pit-bull, is a sweet character also, and the author provides some good background on the breed and rescue issues.

The story has a good plotline and is well written. Sadly, it started off on the wrong foot for me as the first ten minutes included a bit of trash talk and careless irreverent use of the Lord’s name. This was particularly too bad as my ten-year-old granddaughter was in the car when the audio came on. There is a scene in the middle where there is a competition between male and female friends tossing slang names for male privates. Nearer the end they begin a similar contest of names for female private parts. This is intended as fun banter but to me seemed trashy and unnecessary. Finally, there was a closing sex scene that was also crudely graphic.

I saw another release title by Ms. McKinlay and the cover and blurb sounded charming and drew me just as this one did. Too bad I am “word” shy and will probably not seek more by this author. I am probably more sensitive to the language than many readers. There are lots of favorable reviews so the sexual content and language obviously doesn’t bother everyone. If you are a romance reader who wouldn’t be bothered, then give this a try as you may well enjoy the fun … and of course the puppy.

Audio Notes: Allyson Ryan does a very fine job with the narration. She captures the voices and a light tone for the story. Except for a few girlish squeals I enjoyed the narration.


I received this CD audiobook from the publisher through Audiobook Jukebox. It qualified for my 2017 Audiobook Challenge.
Posted by Martha Eskuchen at 10:57 PM