I really liked the sci fi, cyber elements and intrigue in this Cinderella twist. 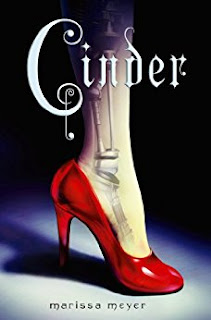 The #1 New York Times Bestselling Series!
Humans and androids crowd the raucous streets of New Beijing. A deadly plague ravages the population. From space, a ruthless lunar people watch, waiting to make their move. No one knows that Earth's fate hinges on one girl. . . .
Cinder, a gifted mechanic, is a cyborg. She's a second-class citizen with a mysterious past, reviled by her stepmother and blamed for her stepsister's illness. But when her life becomes intertwined with the handsome Prince Kai's, she suddenly finds herself at the center of an intergalactic struggle, and a forbidden attraction. Caught between duty and freedom, loyalty and betrayal, she must uncover secrets about her past in order to protect her world's future.


Review:
Cinder has a good reputation as a gifted mechanic who works hard and makes a good bargain. She keeps hidden from her customers that she is a cyborg with a mechanical foot. She was adopted by a scientist father who died before he could make it clear to anyone what his intent was. Cinder is the one who works supporting the “stepmother” (legal guardian) and older stepsister who revile her.

Cinder meets handsome Prince Kai when he brings an android unit in for repair. Her excitement at meeting the prince is overshadowed when the plague outbreak hits her friendly stepsister, Peony. Cinder gets blamed since Peony was with her when she became ill. Her stepmother turns Cinder over to authorities who are testing virus cures on cyborgs. When the doctor tests Cinder he discovers that she is immune to the virus but he learns more than that. He wants to hide her special nature as he suspects some greater intrigue.

Prince Kai loses his father, the king to the plague. Now he is being pressured to marry the Lunar Queen who uses magic to create illusions about her appearance and is extorting his compliance with the promise of an antidote to the virus. Kai must struggle between his duty to his people and his personal desires.

Cinder apparently is immune to the Lunar illusions too which results in great danger as she may be on earth illegally and subject to a death sentence. Only one person knows the full truth, but it isn’t clear if he is a friend or an enemy. Cinder has the chance to escape the city but will her leaving cause Kai to sacrifice his freedom for duty?

I really like Cinder and Kai as primary characters. The doctor and Cinder’s android friend, Iko, are good secondary characters. I enjoyed this cyber twist on the Cinderella story and I like the sci fi lunar intrigue. I am curious to see where Cinder goes in the next book, Scarlet, which I picked up with a December Audible Credit. I recommend this as an entertaining read to those who enjoy sci fi cyberpunk and fairy tale retellings.


This was in my Kindle library since 2014 and qualified for my 2017 TBR reading.
Posted by Martha Eskuchen at 9:35 PM