This is entertaining with lots of action and suspense.

A State of Treason
By: David Thomas Roberts
Narrated by: Charles Craig
Length: 12 hrs and 13 mins 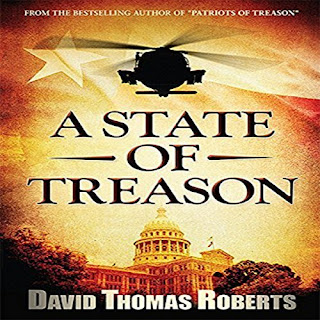 Publisher's Summary
A US president with outward contempt for the Founding Fathers and the limits of the US Constitution, who's administration is rocked by scandals....
The Governor of Texas, the self-described mortal enemy of the president, directs a legendary Texas Ranger to rescue a Tea Party organizer from the clutches of federal agents. The resulting struggle sets the stage for a cataclysmic power struggle between officials in Austin and Washington, DC, further polarizing the nation and resulting in arrest warrants for duly elected state officials.
The rest of the country and, the world, watches in awe and despair as the "Texas Crisis" unfolds, affecting world financial markets amid skyrocketing fuel prices. The Texas legislature sends the vote to the people of Texas and the president orders the vote stopped as he suspends the Second Amendment and declares martial law. Texas is now in A State of Treason.
©2014 David Thomas Roberts (P)2015 David Thomas Roberts


Review:
This is the sequel to Patriots of Treason in the Patriots Series. It picks up where book one ended and continues the political struggles, including the Federal corruption and brutality, that are the basis for Texas considering seceding from the United States.

The story moves along well and includes good action which keeps it entertaining. There are several key characters, good guys and villains, who are life-like personalities. Particularly the legendary Texas Ranger, Pops Younger, is a strong character who encompasses the “don’t mess with Texas” attitude.

The plotline made me ponder how I would feel about any state taking sides against the Union that we love. The author incorporates some timely political issues. Of course, in this book the corruption, including lies, cover-ups and murder, was truly extreme, providing a basis for the actions of the Texas leadership. The cost of rebellion is great but to capitulate might result in loss of freedoms that are intended as part of the American way. I enjoyed this entertaining story of a state at odds with a corrupt Federal government. I recommend this series to readers who like alternate history, action stories.

Audio Notes: Charles Craig does a good job with the narration. His voice took a bit to get used to but pretty soon it seemed to fit the nature of the story. I found this to be good listening!


This was an Audible selection from 2017. It qualified for my 2017 Audiobook Challenge.
Posted by Martha Eskuchen at 11:42 PM