This is an unusual, unhappy character portrayal. 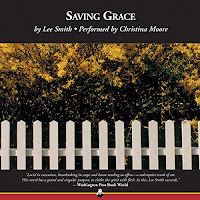 
Publisher's Summary
Having justly earned her reputation as a master storyteller, Lee Smith's name evokes images of authentic country folk struggling through some of life's most arduous tests. Saving Grace adds a stunning spiritual dimension. The daughter of a snake-handling preacher who ignores the needs of his destitute family, Florida Grace doesn't think much of Jesus. He's the reason she's lived in squalor most of her life. He certainly doesn't keep her womanizing zealot of a father on the straight and narrow. In fact, Jesus hasn't been there for her through her failed marriage, or the death of her son. But in one shining moment everything changes when He calls out to her, and she returns to her roots to heed His call.
Narrator Christina Moore gives perfect voice to the vulnerability and wisdom of a young woman on a turbulent spiritual journey.
©1995 Lee Smith; (P)2003 Recorded Books


Review:
Florida Grace is the eleventh child of a snake handling, revival preacher. Her mother, (her father’s third wife) has a loving spirit while her father is a bit too busy to pay much attention to the young’uns. Grace feels out of step for most of her young life. While her parents are busy ministering she is partially raised by a warm, neighbor family.

While Grace is a young teen, an older teen boy shows up claiming a connection with her father. He wrangles a spot in the household and uses his charm to twist his relationship with Grace and others. When Grace’s mother dies, her father takes Grace and sets out on the road to continue his preaching. After a time Grace is abandoned and ends up taken in by the church’s strict pastor. The pastor lives with an equally strict and dour sister who isn’t thrilled to have Grace become part of the family.

Live brings some moments of joy to Grace but more times of trouble, confusion and heartache. Some of the further troubles are brought about by Grace’s own actions which ultimately bring her full circle to her childhood home where she must face herself and the God who has long pursued her.

The story setting is bleak, although the history is eccentrically fascinating. I was glad that Grace is a strong character, at times even vibrant through her struggles. I felt sorrow at the failings in her childhood and in her adult life. I could understand her anger and bitterness and resistance to a God whose truths were so twisted by her father and others close to him.

The major tone of the story is hopelessness. I am not a fan of depressing, family dramas. The blurb gave me hope that there was a revelation in Grace’s story. I trudged through the sadness looking and hoping for the light. The revelation doesn’t come until the very end and I was disappointed by what I found to be a very weak concluding scene.

This is well written with a wonderful depth of description and emotion. Still, I can’t say that I enjoyed the story. It is not really a Christian novel but more an expose of a sad, twisted history of a small religious sect. Readers who like drama, history and in depth character portrayal might find this an interesting read or listen.

Audio Notes: Christina Moore does a good job with the narration which gives extra to my rating. She conveys the appropriate tone of Grace’s emotions throughout the story. I am glad (I think) I listened to this in audio as I am pretty sure I would have skipped to the end if I had a print/ebook version.


This is another Audible TBR from 2010 which qualified for my 2017 Audiobook Challenge.
Posted by Martha Eskuchen at 7:32 PM