This is engaging entertainment – post-apocalyptic world with magical gifts loosed within some survivors.
Year One
By: Nora Roberts
Narrator: Julia Whelan 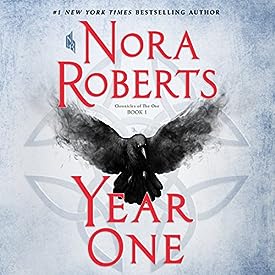 Publisher's Summary
A stunning new novel from the number-one New York Times best-selling author - an epic of hope and horror, chaos and magic, and a journey that will unite a desperate group of people to fight the battle of their lives...
It began on New Year's Eve.
The sickness came on suddenly, and spread quickly. The fear spread even faster. Within weeks, everything people counted on began to fail them. The electrical grid sputtered; law and government collapsed - and more than half of the world's population was decimated.
Where there had been order, there was now chaos. And as the power of science and technology receded, magic rose up in its place. Some of it is good, like the witchcraft worked by Lana Bingham, practicing in the loft apartment she shares with her lover, Max. Some of it is unimaginably evil, and it can lurk anywhere, around a corner, in fetid tunnels beneath the river - or in the ones you know and love the most.
As word spreads that neither the immune nor the gifted are safe from the authorities who patrol the ravaged streets, and with nothing left to count on but each other, Lana and Max make their way out of a wrecked New York City. At the same time, other travelers are heading west too, into a new frontier. Chuck, a tech genius trying to hack his way through a world gone offline. Arlys, a journalist who has lost her audience but uses pen and paper to record the truth. Fred, her young colleague, possessed of burgeoning abilities and an optimism that seems out of place in this bleak landscape. And Rachel and Jonah, a resourceful doctor and a paramedic who fend off despair with their determination to keep a young mother and three infants in their care alive.
In a world of survivors where every stranger encountered could be either a savage or a savior, none of them knows exactly where they are heading, or why. But a purpose awaits them that will shape their lives and the lives of all those who remain.
The end has come. The beginning comes next.
©2017 Nora Roberts (P)2017 Brilliance Audio, Inc.


Review:
A virus spreads even before it is recognized, and it is 90%+ lethal within days. There is little time to seek medical assistance even and the virus spreads like wild fire at the health facilities in the cities. Soon there are scattered and stunned survivors. Some find they have magical features (elves, pixies) and powers (witches and wizards). There are those who use their gits to good and those who revel in evil power. There are also the groups of ‘normals’ who survived and are often fearful of all the newly gifted after having seen the horrible, brutal acts of the evil with powers.

At first the survivors think they might get help from the government. Then the immune and the gifted realize they are likely to be hunted for study and control. Now survivors are on the run from authorities and evil, never knowing what they will face with each stranger they meet.

Ms. Roberts reveals the changing community and carries the story forward through three primary character groups. Lana and Max are white (good) witches who escape from New York and begin to gather strays who see Max as a reluctant but strong leader and Lana as his equally strong, compassionate helpmate. Arlys, a news journalist, continues to report on observations of life changing around her, and finally reveals the initially suppressed threats of government action. She escapes the city with a co-employee who is a cheerful pixie. They meet up with Chuck, who is a computer tech genius hacking into the internet and communication systems while staying under the radar of others online. Rachel is a dedicated doctor trying to work through the heartbreak of death in the hospital, while Jonah, a compassionate paramedic is tempted to escape the death which he unwillingly foresees. These two team together to save the life of a mother who gives birth to twins and agrees to mother an orphaned infant. All three groups must move away from the cities of chaos and journey through the pockets of danger to seek an unknown safe place.

This is a different take on a post-apocalyptic crisis. Clearly Nora Roberts is a talented, skilled author. This genre is different from her main writings of romance and mysteries although some of her romances have included magical elements and the In Death series (penned as J.D. Robb) includes futuristic elements. I enjoyed the entertainment value of this story. The characters are engaging if not necessarily remarkable. Other than the magical gifts they are relatable beings. I like how the conflict, struggle and emotional trauma have scenes of joy sprinkled in the terror of the changing and disintegrating society. There are twists that kept things interesting and set up an underlying thread to be explored in subsequent books.

Although I won’t laud this as “the best post-apocalyptic” story I have read, I did find it thoroughly engaging and entertaining. I am invested enough with the characters to want to read/listen when book two is released.

Audio Notes: Julia Whelan does a beautiful job with the narration. Not only does she give each character a fitting accent and their intended personality but her overall narration flows seamlessly. I definitely appreciated the skillful narration that enhanced this story for me.


This seemed a good Audible choice to start a new year since "it began on New Year's Eve." I purchased this on 1/1/2018 so it qualifies for a 2018 entry in my Audible Challenge and Alphabet Challenge.
Posted by Martha Eskuchen at 9:12 PM