Audible Book Review: One Year After by William R. Forstchen

This was just so realistic. Great entertainment!

One Year After
By: William R. Forstchen
Narrated by: Bronson Pinchot 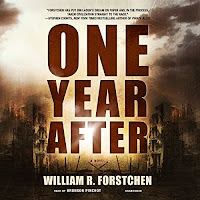 
Publisher's Summary
The thrilling follow-up to the New York Times best-selling novel One Second After.
Months before publication, One Second After was cited on the floor of Congress as a book all Americans should have, a book discussed in the corridors of the Pentagon as a truly realistic look at the dangers of EMPs. An EMP is a weapon with the power to destroy the entire United States in a single act of terrorism in a single second; Indeed, it is a weapon that the Wall Street Journal warns could shatter America. One Second After was a dire warning of what might be our future... and our end.
One Year After returns to the small town of Black Mountain and the man who struggled to rebuild it in the wake of devastation: John Matherson. It is a thrilling follow-up and should delight fans in every way.
©2015 Blackstone Audio, Inc. (P)2015 Blackstone Audiobooks.


Review:
In the first book, One Second After, an EMP attack destroys the US infrastructure. Forstchen describes the devastation and struggles that result in 4 out of 5 Americans dying in the months after the detonation of just several small nuclear weapons.

This book picks up one year later, focusing on the town of Black Mountain. This community has pulled together to survive and rebuild without waiting for a government in chaos to rescue them. The town administrator, John Matherson, is a former military man whose decisive action has helped stabilize the town. He led the training of a group of college students into a local self-defense force when the town had to stop a brutal gang of border raiders. The town people have worked together to set up successful crop arrangements, medical facilities, schools and are on the verge of putting power back online, even if limited.

Unfortunately, the news of the successful defeat of the raiders and the regrowth of the town has reached the ears of political leaders. A pompous military man, Dale Fredericks, arrives as the Federal Administrator in Ashville. This ‘leader’ is a political hack, not a commander. He apparently is intent on getting control of Matherson and his resources. Fredericks begins by using flattery and bribery to try to gain Matherson’s cooperation. If that doesn’t work he is prepared to use force to manipulate Matherson, even if it means hurting innocent civilians and wreaking destruction on the community.

The ‘reestablished’ federal government has instituted a mandatory draft of able-bodied into the Army of National Recovery, ANR. The ANR is sending teenagers for minimal training before pushing them into dangerous, combative situations. Matherson has already lost his younger child and isn’t happy about the thought of his 18-year-old daughter, a mother of a 14-month-old, going off to fight for a tenuous, self-proclaimed government that has been cobbled together by old politicians.

While tensions and hostilities mount between the people of Black Mountain and the federal representatives, Matherson has to deal with community squabbles and border raids, including murder. His troubles include getting kidnapped by a group of independent raiders although he finds a way to escape. Then he has to help defend his town from an invasion by an ANR troop under the command of Fredericks.

This story is well told with non-stop action. I was totally invested in Matherson and his community who are faced with the choice of passively submitting to fascist rule or facing death as they fight other Americans. There are a lot of emotional pulls with anger, fear, love, pride, disgust and more. The characters and scenarios, including the politics, are strikingly realistic.

I listened to the first book a number of years ago and probably should have listened to this sooner. I will be getting the next book, The Final Day, to see what happens next. I think this series is a must read/listen for fans of the post-apocalyptic genre. However, I also recommend it to readers who have any interest in the impact that could result from an EMP strike.

Audio Notes: I was fine with the narration by Bronson Pinchot. He provided different accents for the characters. There were a few whose southern accent was over the edge hillbilly – but that also fit a few of the characters. I became immersed in the story which moved quickly. I appreciated the audio performance that contributed to the entertainment for me.


Source: Audible TBR/sale purchase from 2016. This qualifies for TBR, Audiobook and Alphabet Challenges.
Posted by Martha Eskuchen at 12:45 AM