This is a quick sci fi listen.

The Event
By: Nathan Hystad
Narrated by: Luke Daniels 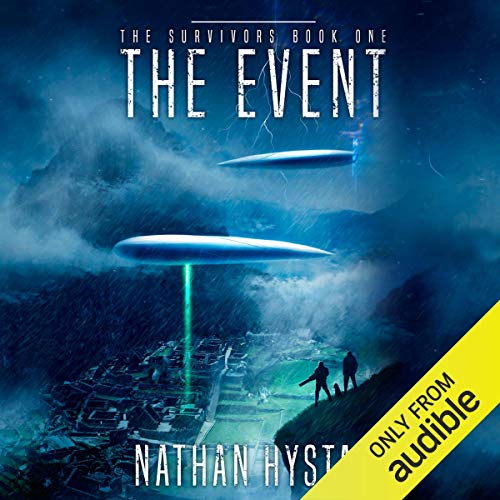 Publisher's Summary
The ships came at dawn. Dean’s wife is dead. Her last words: When the ships come...wear the necklace. Then the ships arrived.
Cities all around the world reported strange alien vessels descending. Some saw them as the heralds of a new age; others fired everything they had at them. All were taken as the beams lashed down and drew them into the sky.
Dean was left behind, seemingly the last man on Earth. A trail of clues left by his dead wife guides Dean on a perilous journey across America and beyond to learn the truth behind the mysterious ships and save humanity from its doom.
But not everything is as it seems.
The Event is the epic first novel by Nathan Hystad, creator of the best-selling Explorations anthology series.
©2018 Nathan Hystad (P)2018 Audible, Inc.


Review:
Dean’s wife suffered an unexplained illness and died a few years ago. She left Dean with a whispered “sorry” and instructions to wear the necklace when the ships arrive. Now the ships have arrived and Dean retrieves the necklace just in time to see everyone around him beamed into the alien ships. Why wasn’t he taken and what secrets did his wife hide from him? With a letter from his dead wife in hand, Dean sets off with his neighbor’s dog as his only companion. It is only as he follows the mysterious instructions of the letter that he begins to find others with similar mysteries. Dean, an accountant, is an unlikely hero to help save humanity but he is a man on a mission and finds more and more reasons to persist as he gets closer to the goal.

This wasn’t really compelling for me but it is a quick story/listen. It kept me interested to see how the small band of survivors would face the aliens. There isn’t a great depth of character development and there are scenes that just don’t jive. I liked that there was light humor and no swearing. There are six more books in the series and the ratings seem to have gotten better so I might continue the series sometime in the future.

Audio Notes: Luke Daniels is a reliable narrator who is able to add life to a story. The narration enhanced the story for me.