This is a good addition moving the series along toward the conclusion.

Eleventh Grave in Moonlight, A Novel
By: Darynda Jones
Narrated by: Lorelei King 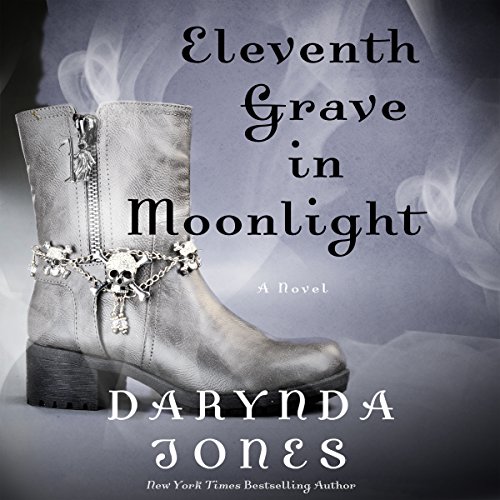 Publisher's Summary
Series narrator Lorelei King returns to narrate Eleventh Grave in Moonlight, the latest installment of Darynda Jones' New York Times best-selling paranormal series.
My entire life can be summed up in one sentence: "Well, that didn't go as planned." (T-shirt)
A typical day in the life of Charley Davidson involves cheating husbands, errant wives, missing people, philandering business owners, and, oh yeah...demons, hell hounds, evil gods, and dead people. Lots and lots of dead people.
As a part-time private investigator and full-time grim reaper, Charley has to balance the good, the bad, the undead, and those who want her dead. Now Charley is learning to make peace with the fact that she is a goddess with all kinds of power and that her own daughter has been born to save the world from total destruction. But the forces of hell are determined to see Charley banished forever to the darkest corners of another dimension. With the son of Satan himself as her husband and world-rocking lover, will Charley be able to defeat the ultimate evil and find a way to have her happily ever after after all?
©2017 Darynda Jones (P)2017 Macmillan Audio


Review:
Charley has her memory again and is happy to be back with Reyes. She is trying to help Cookie who is worried about Ubie (Uncle Bob) who keeps getting grumpier. They are keeping an eye on him until finally a conflict brings his issues out in the open.

Meanwhile, Reyes half-brother, Shaun, has sought help from Charley. She and Cookie track down the foster parents who kidnapped Reyes and then turned him over to the monster man who abused him. Reyes keeps telling Charley to drop the investigation but she now suspects that a missing young girl is the latest kidnap victim and she isn't willing to back down.

Charley is slowly starting to accept her powers as a god with the training help – and challenge -- of  Reyes. When Cookie's daughter, Angel, develops problems, Charley seeks the help of demon Osh to go undercover at school to trap a stalker.

There is plenty of strong, snarky humor to go along with the suspense of the several investigations. There are also several rather sexy encounters between Charley and Reyes. I like how Charley is maturing as this moves along. I can't help but chuckle at the fun, sardonic sayings that start each chapter. There is additional backstory divulged in this volume and it helps as the author prepares for the next story. I wasn’t so taken with book 10, but this one is engaging and moves the story forward. I recommend this series to those who enjoy snarky fantasy, but I do suggest beginning at the beginning.

Audio Notes: Lorelei King has this series down pat with wonderful narration. She conveys the full range of emotion and snark and trepidation of the characters. I truly enjoy this series in audio.

My Reviews for Books 1 through 10 can be found through THIS LINK.
Posted by Martha Eskuchen at 9:35 PM