This is a creative, engaging story. 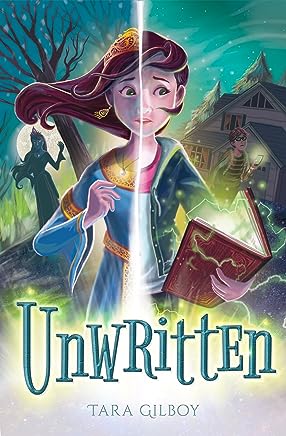 Twelve-year-old Gracie Freeman is living a normal life, but she is haunted by the fact that she is actually a character from a story, an unpublished fairy tale she's never read. When she was a baby, her parents learned that she was supposed to die in the story, and with the help of a magic book, took her out of the story, and into the outside world, where she could be safe.
But Gracie longs to know what the story says about her. Despite her mother's warnings, Gracie seeks out the story's author, setting in motion a chain of events that draw herself, her mother, and other former storybook characters back into the forgotten tale.
Inside the story, Gracie struggles to navigate the blurred boundary between who she really is and the surprising things the author wrote about her. As the story moves toward its deadly climax, Gracie realizes she'll have to face a dark truth and figure out her own fairy-tale ending.


Review:
Gracie tries to live her normal life with her loving mother, but she is troubled. Her mother has told her that they are characters from a story until her parents rescued her with the help of a magic book. Gracie wants to know the full story but her mother refuses to tell her. Gracie knows the name of the author and sneaks out to meet her at a book event. Gracie meets the author and challenges her to tell her about story. The author tries to appease Gracie but things go strangely amiss and the characters are drawn back into the book. Once in the book, the characters have to try to remember who they are in the real world. Gracie especially struggles to determine if she can change her character and the story as written.

This is a creative modern day fairy-tale. The characters are well developed, and I enjoyed the comradeship between Gracie and her geeky scientist friend, Walter. There is a wicked queen who controls the magic but she doesn’t control all of the characters. The story is appropriate for middle age girls but a nice, quick read for adults too. I recommend this engaging tale to those who love ‘book’ stories and fairy tales.


Source: NetGalley 2018. This qualifies for NetGalley and Alphabet Challenges.
Posted by Martha Eskuchen at 8:17 PM