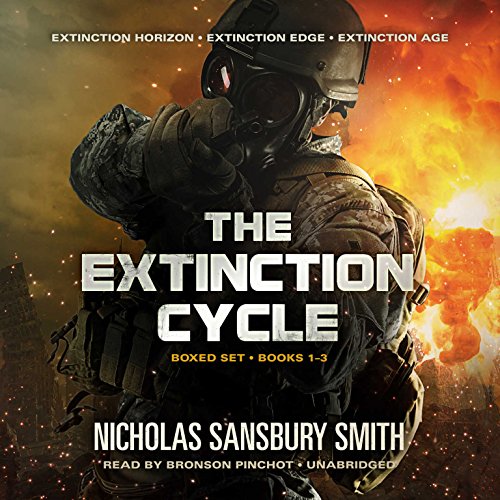 Publisher's Summary
Here are the first three books of the best-selling, award-winning, and top-rated Extinction Cycle series.
Extinction Horizon
The worst of nature and the worst of science will bring the human race to the brink of extinction.
Master Sergeant Reed Beckham has led his Delta Force team, code named Ghost, through every kind of hell imaginable and never lost a man. When a top secret medical corps research facility goes dark, Team Ghost is called in to face their deadliest enemy yet - a variant strain of Ebola that turns men into monsters.
After barely escaping with his life, Beckham returns to Fort Bragg in the midst of a new type of war. The virus is already spreading. As cities fall, Team Ghost is ordered to keep CDC virologist Dr. Kate Lovato alive long enough to find a cure. What she uncovers will change everything.
Total extinction is just on the horizon, but will the cure be worse than the virus?

Extinction Edge
A new threat that will bring humanity to the edge of extinction.
The dust from Dr. Kate Lovato's bioweapon has settled. Projections put death counts in the billions. Her weapon was supposed to be the endgame, but it turned a small percentage of those infected with the hemorrhage virus into something even worse.
Survivors call them Variants. Irreversible epigenetic changes have transformed them into predators unlike any the human race has ever seen. And they are evolving.
With the doomsday clock ticking, the fractured military plans Operation Liberty - a desperate mission designed to take back the cities and destroy the Variant threat. Master Sergeant Reed Beckham agrees to lead a strike team into New York City, but first he must return to Fort Bragg to search for the only family he has left.
At Plum Island, Kate discovers Central Command may have considerably underestimated the Variant population in New York. As Operation Liberty draws closer, Kate warns Beckham that Team Ghost won't just face their deadliest adversary yet, they may be heading into a trap.

Extinction Age
On the eve of extinction, all seems to be lost, but there is still one final hope.
Operation Liberty has failed. Humans are losing the war. With no other option, General Kennor decides to pull back the troops and give science a second chance.
Trapped in the extensive sewer system beneath New York, Master Sergeant Reed Beckham and the survivors of 1st Platoon must battle through the tunnels - where they make a grisly discovery in their attempt to escape.
At Plum Island, Dr. Kate Lovato is working on a new bioweapon to destroy the Variants. But when a derelict Navy destroyer crashes into the Connecticut shoreline, she is forced to deal with a nightmare she thought had ended.
As the doomsday clock ticks down and military bases fall across the country, the human race enters the age of extinction.
©2016 Nicholas Sansbury Smith (P)2016 Blackstone Audio, Inc.


Review:
Book 1, Extinction Horizon: A Delta Force team known as Ghost and lead by Master Sergeant Reed Beckham, is called in on a very secret mission. They are flying into a secret medical facility with a CDC doctor in order to determine the status of the scientists in the facility and, more importantly, to return with a sample of the virus. Reed prides himself on bringing his men home but this time that might be impossible when they discover that the virus is a variant strain of Ebola that turns men into monsters. Reed and some of his team escape and return to learn that the virus has already leaked and is spreading rapidly.

They are next deployed to secure the safe rescue of the doctors and researchers at CDC in Atlanta. Team Ghost is ordered to keep CDC virologist Dr. Kate Lovato alive long enough to find a cure. They are directed to take refuge on a secluded island base that has been built to protect certain powers in the event of this type of outbreak. As Kate and her team race to dissect the virus and find a cure, they discover more secrets about the origin of the virus that might make humans extinct. Although Kate is able to find a partial cure, it has unexpected side effects that place survivors in even more danger of extinction.

Book 2, Extinction Edge: Kate’s bio-weapon has killed many with the virus but has turned a percentage into super monsters who are even harder to kill. Although the percentage should be small, they have the potential to wipe out any ‘normal’ humans. The monsters are called Variants as they exhibit traits of natural predators – wild cats, bears, snakes and more. And they are evolving brain strategies that leave even Team Ghost frightened of the odds of survival.

Team Ghost travels from the dead streets of Fort Bragg to the sewers of New York hoping to rescue survivors. They are in a race against time to get out safely as the military leaders plan to annihilate the cities if they can’t be saved.

Book 3, Extinction Age: Kate is working on another weapon to kill the Variants, but the base is under attack and under pressure. Team Ghost tries to recover supplies from a derelict Navy destroyer that has crashed ashore but what appears to be an abandoned vessel may be another deadly trap. The number of normal humans are dwindling as the Variants are expanding their territories in terrifying ways.

There is plenty of battle action in this series even if the battles against ‘zombies’ get to be a bit repetitive. At least the evolving nature of the monsters keeps things intense. There are good character scenes that balance well with the action. I did like the mystery elements and the tensions regarding the secrets about who was involved in creating the problem. Then there are those superior officers who just won’t listen and contribute to the problems.

I liked how the team members are developed so that I became invested in caring about Reed, Kate and others of the team. Some injured Vets, and even an adopted dog, are pulled into the team and become important players adding to the engagement level. The author does a good job of pulling at emotions as team members face danger and death. It is very likely I will pick up the next three books, also available in a boxed set, to continue the entertainment. I recommend this to fans of zombie and action genres.

Audio Notes: Bronson Pinchot is a reliable narrator. He sets out voices distinguishing the characters and his steady reading carries the story with good energy. I am glad I listened to this good bargain as a boxed set.