I really enjoy the snark and action in this series.
The Last Colony, Old Man's War, Book 3
by John Scalzi
Narrated by: William Dufris 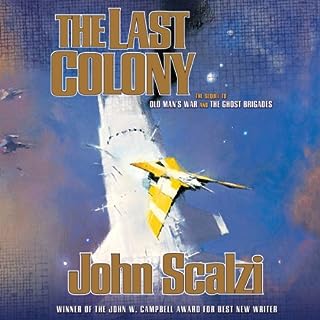 Publisher's Summary
Retired from his fighting days, John Perry is now village ombudsman for a human colony on distant Huckleberry. With his wife, former Special Forces warrior Jane Sagan, he farms several acres, adjudicates local disputes, and enjoys watching his adopted daughter grow up.
That is, until his and Jane's past reaches out to bring them back into the game - as leaders of a new human colony, to be peopled by settlers from all the major human worlds, for a deep political purpose that will put Perry and Sagan back in the thick of interstellar politics, betrayal, and war.
Listen to Old Man's War .
©2007 John Scalzi (P)2008 Macmillan Audio


Review:
John Perry, his wife, Jane, and their adopted teenage daughter, Zoe, with her unique alien guards, Hickory and Dickory, are living quietly as farmers on a distant human colony planet. John is the local authority and has to deal with community issues including disputes over goat propagation between feuding brother.

Then a General from their CU (Colonial Union) past calls them to lead a group of colonists on a planet named Roanoke. The colony is to bring together races from many human peoples who are seeking new colonies. The races all wanted to be the only colonists, but the CU authorities decided there had to be a gathering. These means there are already hostilities and jealousies and not all the colonists are happy to have John and Jane take leadership.

When the ship takes its final time slip to reach its destination, they discover they are not at the planet they expected. The colonists learn that they are a target for attack by another galactic group, the Conclave, who issued a decree banning any new colonies that did not get permission from them. One of the groups of colonists are Mennonites who do not use modern technologies. There was a larger amount of old fashion tools in the supplies for a reason. The colony has to learn to build and farm using minimal technology so they won’t be detected by the Conclave.

The colony is actually being used as bait as the CU has set them up to draw out the Conclave. John and the new colonists are shocked at the betrayal but now they have to figure out how to avoid destruction by the Conclave. They also have to determine who is they can trust.

I enjoyed the snarky rapport that John has with other characters. It makes the story fun listening. Zoe is beginning to appear as a more important character and I enjoyed the nature of her guards. John is able to use their devotion to help protect not just Zoe but the other colonists too. There are tensions and battle scenes with good action that are well balance with the intrigue and personal stories.

This is the third book in the series and I am still enjoying the creative world and characters. I recommend this to readers who enjoy solid space opera with a good touch of humor.

Audio Notes: I enjoy the narration of William Dufris. He brings in the personalities of the characters with distinct voices. His narration makes the story more enjoyable for me.


GIVEAWAY:
One winner.
Gently used Paperback Book (US or Canada Only)

* This contest is open to US or Canada for the paperback book.
* This contest will close 5 PM (Central) December 1, 2018.
Winners are asked to respond on the winners form linked in the announcement or by email.
Posted by Martha Eskuchen at 11:00 PM