I enjoyed the Christian elements of this story but I think the author lost his point in all the plot lines. 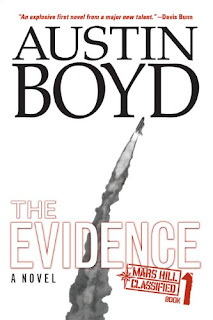 Product Description
As commander John Wells watches from the International Space Station, terrorists cripple Washington. While the world suspects Iranian jihadists, unexplained images from Mars offer a staggering alternative. Caught in a web of politics, John heeds his country's call to head to the Red Planet. Was he born for this moment in history? 448 pages, softcover from Living Ink.


Review:
Commander John Wells has felt a Godly call on his life since he was a young boy. He took all the right steps to prepare himself to follow what he believes is God’s directed destiny. John has been a successful naval officer with a bold record that gets the right attention and gets him selected as an astronaut.

John has had an amazing time on the space station, but just as he is looking forward to getting home to his wife and children, his rotation is extended when another crewman needs emergency care. As John waits to get home, a terrorist attack cripples Washington DC. The evidence points to an attack by Iranian jihadists. Meanwhile mysterious images stun the world as evidence of alien life on Mars. One of the bomb investigators doesn’t trust all the clear clues of the attack. Instead he is inclined to agree with John’s alternate theory that something much bigger is going on.

John has to struggle with leaving his wife and children when he is offered the opportunity to fly to Mars to search out the truth of the pictures. Amy has her own life struggles that extend beyond being in the position of a single parent during the long months that John is away. It is not an easy decision and together they must seek God’s will.

The story covers quite a bit – maybe too much. There are multiple characters and multiple events. The primary story centers around John but there are chapters following a mysterious team who has set bombs for an undisclosed purpose. There is another full set of scientists and sci fi fans who are focused on the revelations of man-sized alien spiders on Mars. I enjoyed the Christian elements which are shared in real life situations. Although it isn't clear from this book if the aliens on Mars are real or a hoax, this does raise the question of whether alien life would challenge Christian faith. Unfortunately, it was difficult to determine the real point the author wants to make. This leaves the reader with a choice: continue the series in hopes of making more sense or move on to something that isn't quite so convoluted.

The title “Evidence” naturally catches my legal interest. It can be derived from several threads of the book and leads into the next book in the series which is titled "Proof". A couple of us are tempted to continue to try to figure out what is going on but the majority of the ladies are moving on to other reads. If and when I read book two I may have a better recommendation.


Source: Print books picked up prior to 2017. eBook picked up on sale 2017. This was read for Ladies Book Club. It qualifies for 2018TBR and Alphabet Challenge.
Posted by Martha Eskuchen at 8:46 PM