#NetGalley Book Review: Once Upon A Heartbreak by Cassie Rocca

This is a cute second chance romance although a little annoying at times.
Once Upon a Heartbreak
by Cassie Rocca 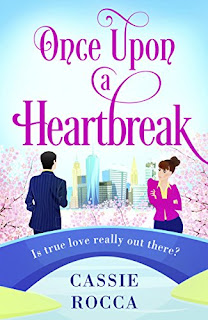 Is true love really out there? A hilarious, heartwarming romance: perfect for the fans of Jo Watson, Debbie Johnson and Holly Martin.
Liberty Allen used to be a hopeless romantic, that is, until Zack Sullivan unwittingly broke her teenage heart.
Fifteen years later, Liberty has her life together in New York City, running a successful business and engaged to be married in just a matter of months. But something just seems to be missing...
All of a sudden, Liberty runs into Zack out the blue, forcing her to question everything she thought she knew about her life, her happiness, and even her feelings on true love...


Review:
Liberty was an overweight 15-year-old when she met Zack, a 17-year-old who was more interested in baking than partying and girls. Both suffered through teen mocking and bullying so it isn’t surprising that they developed a friendship with Liberty being the tester for many of Zack’s baking projects. An event caused Liberty to feel humiliated and abandoned by Zack. Liberty moved away the next day, changing her life to discipline herself to not eat sweets and to exercise rigorously in order to achieve and maintain an attractive body image. Liberty also disciplined herself to close her heart to true emotions and settle instead for rational emotional responses.

Fifteen years later Liberty is engaged to be married to her unemotional, lawyer boyfriend whom she has dated for several years. His sister is getting married and he asked Liberty to marry him and have a double wedding. The wedding is still several months away when they agree to visit Cape May with Liberty’s employees. Liberty is thrown for a loop when she discovers their host is none other than Zack.

Zack, now a single dad of a five-year-old daughter, is thrilled! He is awed at how beautiful Liberty is but he is dismayed that she tries to avoid him and won’t eat the meals and desserts he has prepared. He realizes she has lost the sparkle he cared for so many years before. Liberty tries to hold onto her anger from the loss of her first teenage crush but part of her wonders if Zack could really care for her as she is. Can Zack convince Liberty that he truly does care for her before she walks down the aisle to a ‘comfortable’ but uninspired marriage?

It was frustrating and sad to read Liberty’s lack of confidence and the extremes she took to change her nature. Zack and his daughter are lovely characters and Liberty’s friends are nice additions with their own romances. I found the ending a bit strange as it veered to cover the romances of Liberty’s friends in addition to her own romance. I didn't realize that this is the third story and the other romances were wrapped up here.

I found the story an easy read, and mostly fun if you can get beyond Liberty’s insecurities. I recommend this to readers who enjoy second chance romances.


Source: NetGalley 2018. This qualifies for NetGalley Challenge.
Posted by Martha Eskuchen at 8:04 PM