This Christian romantic suspense was right on target for me.
Kill Shot: A Novel (White Knights Book 2)
by Susan Sleeman 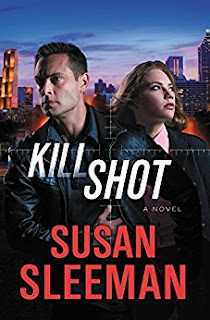 Suspense and romance combine in Susan Sleeman's thrilling new novel about an FBI agent who must team up with a beautiful therapist to stop a killer with a deadly new weapon.
Some fears haunt you forever....
As the ballistics and weapon's expert for the FBI's special task force nicknamed the White Knights, Rick Cannon has known the Department of Defense was developing self-steering bullets. Rick feared these smart bullets--which have one hundred percent accuracy that can turn even a novice into a lethal sniper--would eventually end up in the hands of the wrong people. But since the ammunition was still in the development stage, he figured they had plenty of time before that happened. He was wrong. Dead wrong.
Until they become reality.
When a homeless vet is killed with a smart bullet, it's clear that the ammunition has been stolen, and the Knights are called in to find the thief and stop the killings. But they aren't the only ones desperate to find the killer. Therapist Olivia Dobbs is well known for her success in counseling military veterans with PTSD. When she discovers one of her clients moments after he is murdered, she becomes both the FBI's prime witness, and suspect.
Despite the mutual attraction that immediately sparks between them, Rick can't--no he won't--let Olivia interfere with his investigation. But when the sniper trains his rifle on her, Rick must recall all the skills he learned as a Marine sniper to make sure the next bullet fired isn't a kill shot that takes Olivia out.


Review:
Olivia is a Christian therapist who has counseled a number of vets suffering from PTSD. She is trying to help a particular patient who is acting paranoid, thinking someone is going to kill him. The man takes off in anger and she decides to try to catch up. When she finds him, he has just been killed and she narrowly escapes the killer. The next thing Olivia knows she is being interviewed by the FBI even thought she doesn't understand why they are on the case. Soon it is apparent that she is not just a person of interest but may be a suspect.

Rick is the lead of the FBI team brought in on a rush to investigate the murder. They are there not because of the victim but because of the use of stolen self-steering bullets. They cannot reveal the secret nature of their mission to anyone as the team implements their special skills to uncover the theft and plot that is bigger than the murder.

Rick doesn’t trust anyone. He hasn’t even let his teammates get too close to his personal frustrations and vulnerabilities. Rick is with Olivia when a sniper tries to kill her. Now he is determined to keep her close so he can better keep her safe while he discovers if her caring nature is real of if she has a nefarious connection with the criminals.

The chemistry between Rick and Olivia is nicely done. It is clear they try to keep things professional, but the attraction keeps pulling them closer together. Rick’s team of forensic experts contributes strong interest and personalities. Olivia’s family adds distraction - some pleasant and some very stressful.

There is a full story with danger and suspense and the romance is a nice add in. I especially enjoyed the Christian foundations shared by Olivia and the way her patience wore down Rick’s resistance. I have some other titles by Ms. Sleeman and I need to get to read them as I enjoy her style. I'd like to read the other books in this series too. I recommend this to readers who like romantic suspense.


Source: 2018 NetGalley. This qualifies for NetGalley and Alphabet Challenges.
Posted by Martha Eskuchen at 9:35 PM