Audible Book Review: For We Are Many by Dennis E. Taylor

I enjoyed this fun listen.
For We Are Many
Bobiverse, Book 2
By: Dennis E. Taylor
Narrated by: Ray Porter 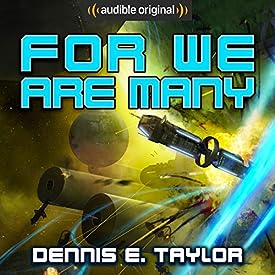 Publisher's Summary
The highly anticipated sequel to Audible's Best of 2016 - Science Fiction winner, We Are Legion (We Are Bob); a book listeners are calling "so much fun", "what science fiction was meant to be", and what would happen if "Andy Weir and Ernest Cline had a lovechild".
Bob Johansson didn't believe in an afterlife, so waking up after being killed in a car accident was a shock. To add to the surprise, he is now a sentient computer and the controlling intelligence for a Von Neumann probe.
Bob and his copies have been spreading out from Earth for 40 years now, looking for habitable planets. But that's the only part of the plan that's still in one piece. A system-wide war has killed off 99.9 percent of the human race; nuclear winter is slowly making the Earth uninhabitable; a radical group wants to finish the job on the remnants of humanity; the Brazilian space probes are still out there, still trying to blow up the competition; and the Bobs have discovered a spacefaring species that sees all other life as food.
Bob left Earth anticipating a life of exploration and blissful solitude. Instead he's become a sky god to a primitive native species, the only hope for getting humanity to a new home, and possibly the only thing that can prevent every living thing in the local sphere from ending up as dinner.
Listener favorite Ray Porter returns to narrate Bob - and his many incarnations - in all of their geeky glory.
©2017 Dennis E. Taylor (P)2017 Audible, Inc.


Review:
This continues the fun difficulties, joys and growth of the “Bobs”, the sentient computer AIs that are extensions of the brain of Bob Johansson. Bob is/was a brilliant scientist, engineer, computer geek… His AI replicants are each a unique and interesting variety on the original Bob, with different genetic, emotional or moral elements taking precedence. Once replicated, each AI picks his own name.

This book follows several of the many Bobs. Bill, the first computer Bob’s first replicant, is the central computer wizard, always upgrading the technical and communication aspects to give the Bobs the best connection and the best carriers and defenses. The original AI Bob has made the first alien contact and has adopted a young boy in a primitive tribe. The interventions of Bob and his ‘son’ Marvin, are changing the tribe, not always with the approval of the natives.

Riker is one of the earlier replicants who returned to the devastated earth. He and several AI ‘brothers’ or ‘sons’ are trying to evacuate the humans to safe planet colonies that are being discovered by other Bobs. While coping with the competitive arguing of the remaining human groups, Riker and companions are also trying to ferret out the terrorists who are sabotaging food, defenses and other survival resources.

Other “Bobs” have traveled in various directions in space seeking new planets for terraforming and colonization. Some of these “Bobs” have now come across a deadly alien force who destroys entire cities and species. They are racing against time trying to find a way to stop this powerful menace before it wipes out another planet of sentient beings.

I thoroughly enjoyed the emotional elements, intrigues and action in this sequel. The varieties in the personalities are fascinating and it was interesting to see different emotions in the AIs. There are some sad and tense moments and even a bit of romance. Woven throughout is the continuing ironic humor. It is more light entertainment than heavy space opera, but that is fine with me.I will be getting  book 3 to find out how the Bobs fair against The Others. I recommend this to sci fi fans who enjoy a lighter work with humor.

Audio Notes: Ray Porter does a spot-on job with the narration. He captures the various personalities with unique and suitable voices. The audio enhanced the reading enjoyment for me.