This story shares great history with a light mystery.
The Darling Dahlias and the Unlucky Clover
by Susan Wittig Albert 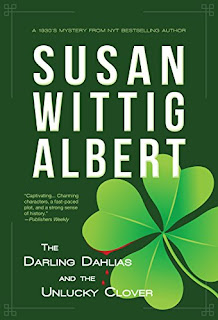 It is 1934. FDR is in the White House, the New Deal is in full swing, and Prohibition has finally been repealed. Bestselling author Susan Wittig Albert returns to Darling, Alabama, where the ladies of the local garden club aren’t afraid to dig a little dirt if that’s what it takes to cultivate a mystery . . .
When the Lucky Four Clovers run into a string of bad luck, it looks like the music may have ended for Darling’s favorite barbershop quartet—just when the Dixie Regional Barbershop Competition is about to take place. To complicate things, there’s a serious foul-up in Darling’s telephone system—and Myra May and Violet don’t have a penny for repairs. The town’s party lines may have to go out of business, which would be bad news for the gossips.
And it doesn’t help that newspaper editor/publisher Charlie Dickens is facing a crisis of confidence in his new wife, Fannie. Or that Liz Lacy (the Dahlias’ president) has to decide whether she’s ready for a do-over in her ill-fated romance with Grady Alexander. And what’s that secret her old friend Fremon is keeping? What does he know about what happened to the unlucky Clover on that dark night on the Jericho Road?
While liquor is legal again, moonshine isn’t, and as Sheriff Buddy Norris discovers when he goes into Briar Swamp to confront Cypress County’s most notorious bootlegger, it helps to have a little luck. But whatever the challenge, the Dahlias know that pie fixes everything. And you will, too, when you hear what they’re baking for Darling’s pie supper.
Once again, author Susan Wittig Albert has brought us a charming story of richly human characters who face the Great Depression with courage and grace. She reminds us that friends offer the best of themselves to each other, community is what holds us together, and luck is what you make of it.
Traditional Southern pie recipes (and a little cookery history) included!


Review:
Liz Lacy, one of the Dahlia Darlings, is the part time secretary to a lawyer. They have gotten a call from a local woman whose husband has gone missing. A day later the wrecked car and body are found. The deputy and sheriff realize quickly that what may look like an accident was something more sinister. Now they have to figure out why and who considering the deceased had several people in town unhappy with his business dealings.

While Liz talks to town folk trying to unravel the mystery from the view of her office, the author shares a wealth of details regarding the lifestyle in 1934. There are descriptions of cars, clothing, switchboard telephone system with party lines, old time newspaper with Linotype, and lots of pies including shoofly pie which is one of my favorites. There is also discussion of political issues such as the new deal, repeal of prohibition, Works Programs Administration (WPA) and more.

This is a good cozy mystery with wonderful history. The history made this as much fun to listen to as the mystery. There are also gardening details for garden buffs and yummy pies play a part of the story. After the conclusion there are several pie recipes shared from sources as early as 1837. The writing style flows well for an easy, enjoyable read. I recommend this to cozy mystery fans who would enjoy the nostalgia and history of the 1930s.


Source: NetGalley 2017. This qualifies for my 2018TBR, Alphabet and NetGalley Challenges.
Posted by Martha Eskuchen at 2:49 PM